Did Claude Monet’s Ghost Just Visit His Own Exhibit?

We’re halfway through October, and we’re pretty sure some of you aren’t just excited about Halloween because of the costumes, but also for all things spooky and creepy. so we’ve got a story for you that’s one part spooky, one part nostalgic, and all-over Whaddaya Think?

The Cleveland Museum of Art was proud to hold an exhibit in honor of French impressionist painter Claude Monet. Jeffrey Strean, the museums director of architecture and design, gleefully hung up a life-sized photograph of the painter for its visitors to admire. “Monet himself would be proud of this,” he quipped.

He snapped a photo of his work. What resulted from it was something he never expected to find.

Check out this image for yourself:

The photo attracted much attention online; the museum wrote on a Facebook status update that the photo was untouched. Commenters were quick to have their say on the matter: 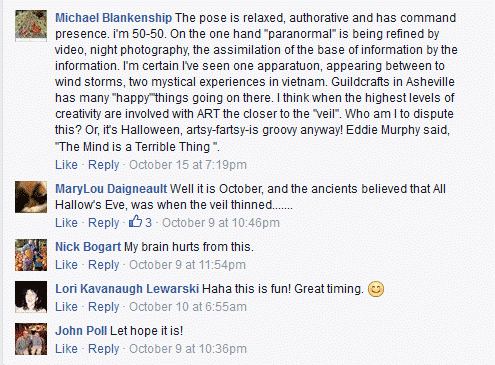 People tweeted their responses. Some naysayers felt it was just their eyes playing tricks on them:

@ClevelandArt @wkyc I do believe into spooky stuff, but this is just pareidolia — Efsun @ makeuptemple (@makeuptemple) October 15, 2015

Though one was certainly feeling the unearthly artistic vibrations.

WKYC did report that some museum employees did spot a man dressed as Monet wandering the museum, though they had no idea who he was or where he came from.

Whether the ghost of Claude Monet is a hoax or not, the museum’s website does say that it has William Milliken, its director from 1930 to 1958, who wanders its halls as its resident ghost. It even has a page documenting its paranormal activity, perhaps for anyone intrepid enough to actually try surviving a night at the museum.

You may also enjoy:
Drunk Man in Trouble for Pretending to Be Ghost in Cemetery
Creepy Doll Terrorizes Singapore Citizens