11% of Americans Think HTML is an STD

There are lots of ways people get out of touch with the times. Sometimes people miss out on a lot of information and just try to figure things out for themselves. This is not one of the good ways.

A recent study from VoucherCloud and published in the LA Times shows that 1 American in 9. an uneasy 11%, think that HTML is an STD.

No, really. Yes, I feel your facepalm.

So what exactly is HTML? this is what HTML looks like:

HTML stands for “Hypertext Markup Language”, and is a programming language that is used to create websites. You know, like Facebook?

But wait, that’s not the end of it. The study also resulted in a number of other embarrassing findings, such as:

18% identified “Blu-ray” as a marine animal. It is a disc format typically used to store high-definition videos.

15% said they believed “software” is comfortable clothing. Software is a general term for computer programs.

12% said “USB” is the acronym for a European country. In fact, USB is a type of connector.

77% of respondents could not identify what SEO means. SEO stands for “Search-Engine Optimization”.

27% identified “gigabyte” as an insect commonly found in South America. A gigabyte is a measurement unit for the storage capacity of an electronic device.

42% said they believed a “motherboard” was “the deck of a cruise ship.” A motherboard is usually a circuit board that holds many of the key components of a computer.

And that’s just the tip of the iceberg. 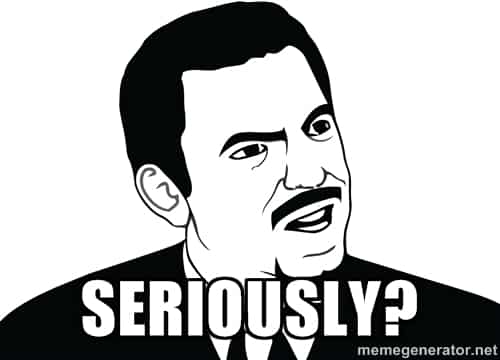 You might think, “hey, but what if VoucherCloud just interviewed a host of seniors? surely they’d be unfamiliar with all these tech terms!” Sorry to refute that — VoucherCloud surveyed 2,392 people ages 18 or older for this study, allegedly carrying the title of the “information generation”. According to the L.A. Times, the sample group “were given both tech and non-tech terms and were asked to choose from three possible definitions.” Aaand that list above is what they found out.

Yyyyeah. Not looking too good, guys.

You may also enjoy:
Facebook Hoax Is Making the Rounds — Again