As concern over government surveillance grows, some police departments have been suspected of using technology obtained from the NSA to spy on potential law-breakers.

The news comes amidst concerns that the magnitude of government surveillance is excessive. In particular, revelations about the extent of domestic spying by agencies like the NSA have ignited a firestorm of controversy in the United States.

This case, however, is raising unique concerns. Much like the assault weaponry and armored vehicles local police departments purchase from the military, the dirt box equipment comes second-hand. Writing for Reveal, journalist Ali Winston says:

“The purchase of the equipment in two of the largest U.S. cities raises questions about the migration of interception technology favored by the National Security Agency and the Pentagon to local police departments. The use of this surveillance technology by domestic law enforcement – which has not been reported previously – is another striking example of how military technology is flooding local agencies.” 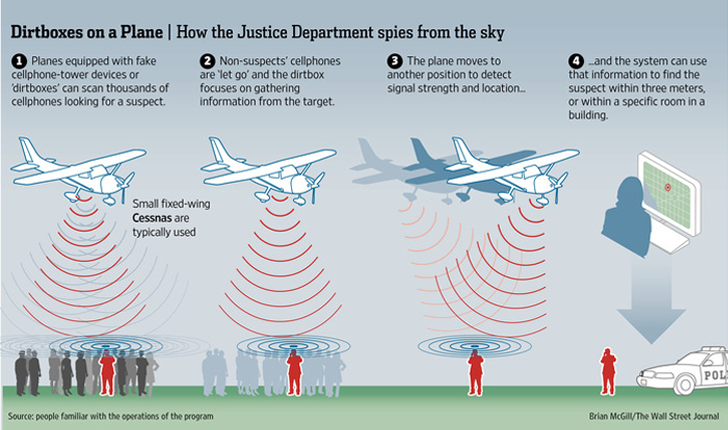 Activist Freddy Martinez is one of those concerned. He has sued the Chicago Police Department multiple times over issues of civilian surveillance. “If you put one of these on an airplane and fly them around, you can find all sorts of info about potentially thousands of people,” he told Reveal, adding: “That includes voice content, who they’re calling, what data they’re sending. It’s like a StingRay on steroids.”

Stingray is the name for another surveillance technology, widely adopted by police departments around the country.  “It’s extremely troubling that LAPD acquired the National Security Agency’s tool of choice for monitoring foreign cellphone communications and is using it for local investigations in Los Angeles,” said Peter Bibring, an attorney at the American Civil Liberties Union of Southern California. “They acquired this technology essentially in secret,” Bibring said. “The police department did not disclose the full capability of the technology.”

Legal experts note the devices may not be all that useful in putting away criminals. Since the operation of these devices is shrouded in secrecy, defense attorneys can easily poke holes in the state’s case, and ask a judge to exclude any evidence obtained through the warrantless use of dirt box and Stingray devices.

Earlier this year, a Los Angeles criminal defense team made the case that four men accused of killing an Oakland, California police officer could not be convicted with evidence obtained through the surveillance technology, as police officers failed to obtain a warrant for its use.

Chicago attorney Matt Topic says some law enforcement officials are trying to get around the need to obtain a warrant for listening in on cell calls. He provided Reveal with documents showing Chicago police are using “pen registers” to skirt around the process. Pen registers authorize police to track outgoing and incoming calls from a particular number, but not necessarily to listen to them. “Chicago police are claiming the existing court orders are under seal,” he said, “they’re not telling judges they’re using a cell-site simulator [dirt box or Stingray device].”

Martinez added: “What’s happened here is the U.S. goes to war against a foreign country under dubious circumstances, private companies develop these surveillance technologies with the help of the CIA and NSA, and they import them back home and use them on Americans,”

As calls for more police accountability and transparency are made around the country, only time will tell if advanced surveillance technology will continue to be adopted by local police forces.

Video Portrays the Fears of POC Because of Police Brutality