A series of photos posted on Imgur became an overnight sensation and quickly climbed up the ranks to a million views. You may want to put your bacon down before viewing first, though.

Imgur user GlendilTEK posted a series of photographs entitled “The Wierd Pig“.  It catalogues the results of his in-laws shooting a wild pig  that seemed to have wandered onto the grounds of their ranch on Morgan Hill, CA. It looked like a pretty normal pig — until they cut it open. 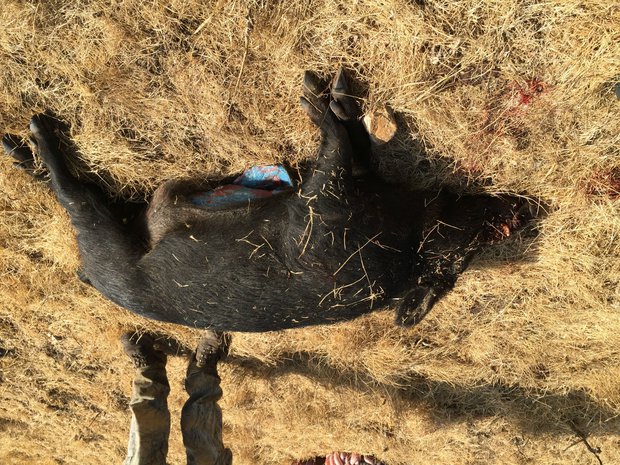 Hold on… what’s that bit of blue poking out of the pig..?

“When they cut into the pig they found that the fat on the pig was a fluorescent blue,” GlendilTEK writes.

This bizarre occurrence baffled the poster and their in-laws. The couple had shot and eaten wild pigs from around the area, but had never come across such a case as this. 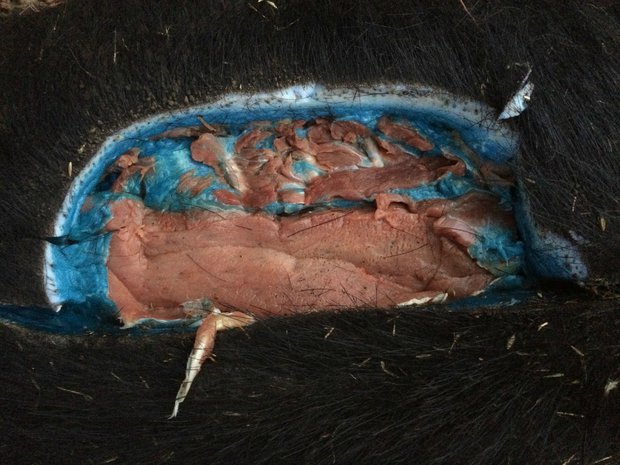 “I know blue pigmentation is often caused from copper poisoning but all that they have are some old mercury mine shafts that they have filled in,” GledilTEK continued. “They have also shot wild pigs on the ranch before and none of them have been blue.”

A slew of comments fired up th thread, and the poster followed up with this statement: ““Just to clarify since there has been questions they did not start cutting open the pig until they had strapped it to the ATV and driven back home so most of the blood has left the pigs body at this point.”

The family is sending a sample to UC Davis in hope of putting all the burning blue questions to rest.

Andrew Hughan, a spokesperson for the California Department of Fish and Wildlife, said he and his colleagues have “occasionally seen cases where wild pigs have exhibited similar discoloration of their insides. In those cases, it was determined the affected animals had likely consumed chemicals that contained a blue dye.”

But is this pig edible? Hughan strongly cautions against sitting down to a breakfast of blue bacon and sausages. “Pigs eat pesticides and rodenticides, and it stains the fat of the pig. We recommend not eating the animal, and you should try to dispose of it so it doesn’t get back into the environment.”

Camera Falls From Plane, Lands In Pig Pen. This Is What It Saw [Video]