Feel The Holy With These Pope Emojis

September 22 marks the day Pope Francis touches down on the runways of the United States, and American Catholics will be thrilled to be there to welcome him.  From seeing the sights, visiting historical landmarks, to enjoying delicious treats along the way, the Smiling Pope is set to make this visit to the US one to remember.

So, why not spread the love and cheer to your friends with a Pope Emoji? 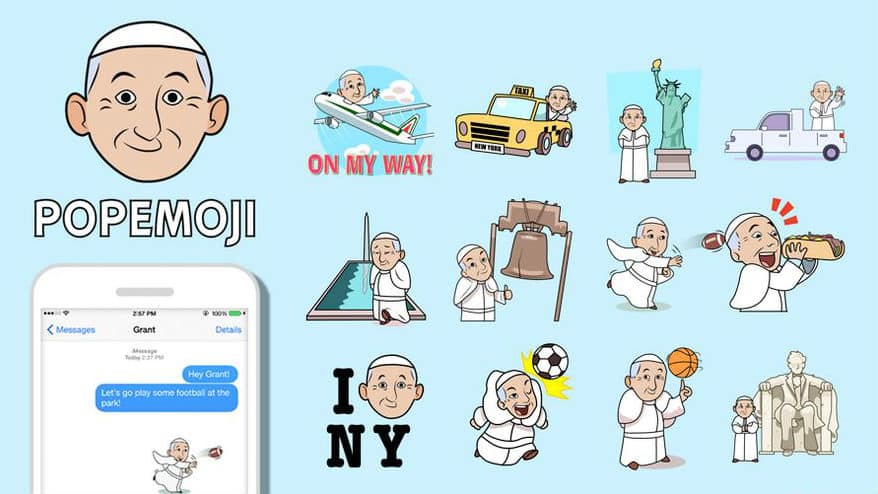 The good folks over at Swyft Media have come out with a sweet, fun set of emojis celebrating Pope Francis’ highlights of his US Trip itinerary later this month. The Popemoji app, was released on iOS and Google Play this past Thursday, is quickly gaining fans among the smart-phone-friendly faithful.

The set features 52 Pope-themed stickers, and 14 animated gifs of Pope Francis doing Pope things. The keyboard app can be used on most messenger apps, just like any other third-party keyboard app.

And you can’t deny this is one cute set. From playing soccer, to eating a hotdog, to even taking a selfie, the Pope Emojis highlight his easy-going, chill Pope who keeps up with the times. “We worked really hard to have his persona and his emotion and his fun charismatic attitude come through in each one of the emoji,” says Evan Wray, the cofounder of Swyft Media, who also designed the emoji and GIFs in the app. 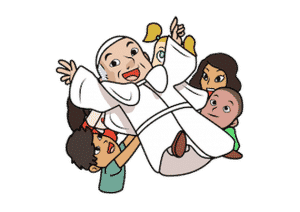 These emojis may well become a part of Pope Francis’ legacy to the Catholic Church, and has indeed caught the attention of the Vatican. Kathleen Hessert, founder of Sports Media Challenge, the company that oversaw the creation of the app, notes that this venture is proving quite the novelty to the Catholic Church, a body that isn’t particularly known for being tech-savvy.

She recognizes that this may earn some critics among some conservatives who aren’t too keen on the lighthearted depictions of the Pope, but also also acknowledges it is one of the main reasons why this pontiff has become so popular and important.

“We look at the whole initiative of connecting the church better with young people and young people with the church as fandom,” Hessert shares with Mashable. “If he was a very stoic kind of pope like we’ve seen so many times in the past, it probably wouldn’t work. Pope Francis is a down-to-earth guy.”

You may also enjoy:
Man Hangs up on “Pope Prank Caller”, Finds Out It’s Actually Him

250 New Emojis Will Be Released Soon