Why SocialBattles App Is Being Called ‘Instagram On Steroids’ [Video]

A new app will have you snapping even more selfies (as if you needed the excuse.) SocialBattles aims to create a little friendly competitions using your photos. The free app is the brainchild of two brothers, who love a little competition. The demo video shares the story of the two brothers who became bored with the normal way of sharing photos and wanted to create a way to turn the photo sharing process into a battle. The basis of the app is simple and the interface seems easy to use. After snapping a photo, upload it to the app. Once a photo has been chosen, the user can create a battle title. The battle topic can be literally anything you desire. Don’t forget to accompany your title with a creative hashtag. After choosing any battle title or topic the user desires, the fun begins. 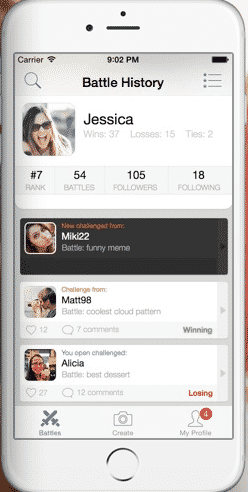 There are two ways to play. Users can directly battle one-on-one with a friend or upload a photo to the public feed to start a giant battle. In the latter, all users of SocialBattles can view the photo and vote for their favorite. For an app that was recently introduced to the App store, the amount of battles going on is tremendous. From selfies and pets to memes and jokes, users are obviously enjoying Social Battles.

For example, if a user has chose to directly battle a friend. The friend will receive his friend’s photo and have the chance to upload their own photo. Once the photos have been submitted, social media friends can vote on which snapshot they like better. The winner not only gets bragging rights, but moves up in the app’s rankings of top users.

One of the creators of the app explains they developed the app with the idea of allowing users to battle on any subject they would like.

“We created World Hashtag Rankings, which provides a world ranking of photo creators for each hashtag based on battle results. This gives photo creators an opportunity to build a reputation in any hashtag they care about,” said Sandro De Moraes.

Each photo used in a battle is ranked globally using these World Hashtag Rankings. This means even the most simply photo can become an attention grabber.

SocialBattles was introduced to Beta users and received rave reviews. Some even called it “Instagram on steroids.” Other feedback compared the app to other photo apps, such as Snapchat. De Moraes explained that the testing phases displayed tremendous results and the developers couldn’t be happy with the quick growth in popularity.

“We are excited that key metrics are showing strong user engagement. One user battled 900 times in three months and another voted over 300 times on her first app open!,” said De Moraes.

Perhaps you want to get in on the fun, but you don’t want to share any of your photos. Don’t worry, the developers of SocialBattles have thought about that. Users that don’t wish to upload a photo can still browse open battles and vote. Users can also check out battle results, not to mention discover some pretty awesome photos and photographers.

De Moraes also explained how many high-end photographers are using the app to get their work more exposure. Basically, it’s a promise that you will always find something interesting each time you log on.

He furthers explains that SocialBattles was created with the mission to help transform people’s everyday photos into something worth talking about. These battles are turning daily snapshots into fun competitions.

“Ultimately, our goal is to give the world a new way to share their stories, be creative and interact through photos,” said De Moraes.

Social Battles is now available for free in the Apple App Store. There is no word on whether an Android version is in the works. You can get more information on their website, socialbattles.com.