Boy Does Unthinkable When His Cartoons Are Interrupted

Some kids really enjoy their cartoons. It seems one kid took them a little too seriously. A shocking story is being reported out of the Guizhou Province. It seems a 10-year-old boy was watching cartoons when he was interrupted by noise coming from a construction worker. A man was installing a light to the outside of the apartment building on the eight floor. Relying on only a safety line, the construction worker heard a strange noise. He looked up to see the young boy cutting his lifeline with a knife.

The man says he immediately started yelling at the boy, begging him to stop. The child seemed not to hear him as he continued to cut the rope. The severed rope meant the construction worker was left clinging for life. His cries for help were finally heard, but it still took rescue workers nearly 40 minutes to get to him because they couldn’t find an apartment with someone home to let them in. 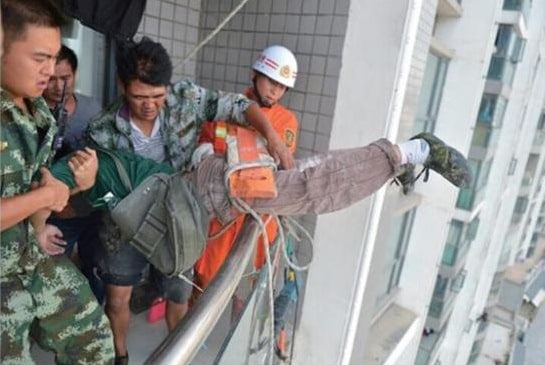 Once the man was safely on solid ground, police began to search for the little boy. At first, the 10-year-old denied any guilt, but eventually cracked under pressure.

“The sound of drilling outside was noisy while I was watching cartoons, so I cut the rope with a knife,” the boy told police.

The boy’s parents were upset to hear the news. Apparently, they were at work at the time of the incident. After an apology, the boy’s father paid for the severed safety line.

We were left with one question: What cartoon was this kid watching?