This video went online back in 2014, but we think it’s pretty cool and deserves a spotlight here on SND.

This particular video has recently had a number of Tumbler folk oohing and aahing, and with good reason. We see a raven-haired dancer clad in a bikini, leather vambraces, weighted boots, and body paint, gracefully going through her forms and gliding from point to point as imposing lemon sharks and tiger sharks swim around her, skimming the sandy sea floor and keeping a wary distance of the strange lissome creature in their shoal.

Just who is this woman who dances with sharks? A shark sea nymph? A refugee from Atlantis? A Tiger Sharks cosplayer? Whatever the reason behind this phenomena, this dance has left people astonished and mesmerized.

Meet Hannah Fraser, also known as Hannah Mermaid. Hannah is a professional mermaid, model, performance artist, and environmental activist. A true-blue Aussie, her uncanny combination of dancelike swimming, ability to hold her breath for incredibly long periods of time, and dedication to her marine life advocacy has brought her around the world in photoshoots, videos, advertisements, and performances. she also personally handcrafts her own mermaid tails, with each model having its own stunning beauty and functionality all to its own. 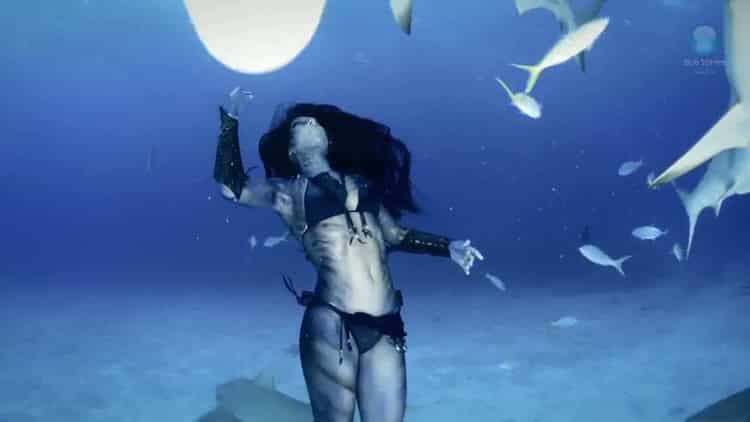 The video above, entitled “Tigress Shark”, is a performance art piece conceived as a form of protest against the shark culling sanctioned by the Western Australia government. Hannah dances among the sharks, even petting a nose and stroking a fin as they swim by, as proof that these creatures are not the mindless killing machines media and popular thought has made them out to be.

The secret to the success of this video lies with the careful planning of the crew on keeping Hannah safe — played largely in part by her makeup colors and body paint.

“We had talked about the fact that anything light—white in particular—is a big attraction to the sharks,” she shares with VICE. “Their visual cue is tapped into anything that looks like a fish and the fish they eat have white bellies and are kind of shiny. So tail? Totally out. A big shiny tail down there would’ve been eaten immediately.”

“So these sharks are used to seeing scuba divers who always wear black or dark colors, so we knew we had to look like a nice shiny fish,” she continues. “Especially my fingers—floating around doing my hand movements all the time. If they’re uncovered and look really white under the water, that’s definitely increasing the risk a lot. So we came up with this idea: it has to be dark, so why not have me look like the tiger sharks, to have a cohesive artistic vision. So we came up with this tigress look…. It was something that was inadvertantly created that worked totally for our purpose.”

This Sweet Shark Will Make You Smile [Video]