Whoever’s running Microsoft’s Windows Phone Twitter account thought it would be a good idea to create the hashtag #DroidRage where Android users could share their malware horror stories. It appears they were planning on giving away a new phone to a lucky person.

Do you have an Android malware horror story? Reply with #DroidRage with your best/worst story and we may have a get-well present for you.

Turns out, that was a bad idea. Many tweets have been posted chastising Windows Phone and throwing a few jokes in.

I hacked my windows phone and installed Android on it!!!! #droidrage!

I once thought about writing malware for a @windowsphone but then I thought, aren’t they suffering enough? #DroidRage #WindowsRage

What #DroidRage? I’ve been very happy with Android for the last 3 years. I’ve never known anyone with malware issues…this isn’t Windows…

Microsoft slamming Android with #droidrage for malware issues?have you seen your desktop OS?

I dropped a Galaxy Note once. It crushed a house and killed a family of four. #DroidRage

Windows is on cell phones? Do you have to format the Memory and reinstall the OS every 6 months? #droidrage

Because of what Microsoft started on Twitter, the hashtag #WindowsRage is trending on Google Plus. It’s currently at the number two spot, showing an all-out attack on Windows. 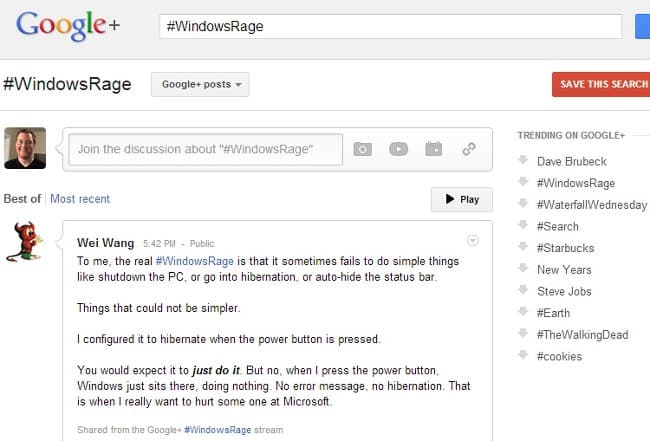 Creating conversations around hashtags can be tricky. McDonald’s is a great example of another company that had a hashtag backfire horribly. In the meantime, Microsoft and Windows Phone appear to be ignoring tweets with #DroidRage even though they’re continuing to flow in.