McDonalds Nopes Out of ‘McWhopper’ Peace Talks with Burger King

It could have been so beautiful; could’ve been so right.

Yesterday, Burger King extended the olive branch to rival fast-food giant McDonald’s — they set up an open letter and a video proposing the create the epic “McWhopper” — a hybrid burger of the Big Mac and the Whopper  — to celebrate Peace Day on September 21st. The burger would be sold in one choice branch in the US for one day only, with all the proceeds of the sale of the burger benefiting Peace One Day, a non-profit organization campaigning to make September 21 as Peace Day, and have it celebrated as an annual day of global unity.

Watch the video proposal below:

The concept of the McWhopper instantly captured the imaginations and appetites of burger-lovers everywhere.  A delicious, juicy ensemble of two 100% beef burger patties, cheese, lettuce, tomatoes, pickles, and McDonald’s signature Big Mac sauce and BK’s classic mayo — all for the cause of peace on earth and goodwill to mankind. It’s the stuff dreams are made of!

Commenters were aghast at the response.

Sorry, McDonald’s. Saying the proposal wouldn’t be “meaningful”  enough, saying “friendly business rivalry” is no match for the “real pain and suffering of war”, and condescendingly saying “A simple phone call will do next time” get you no love from fast-foodies everywhere. 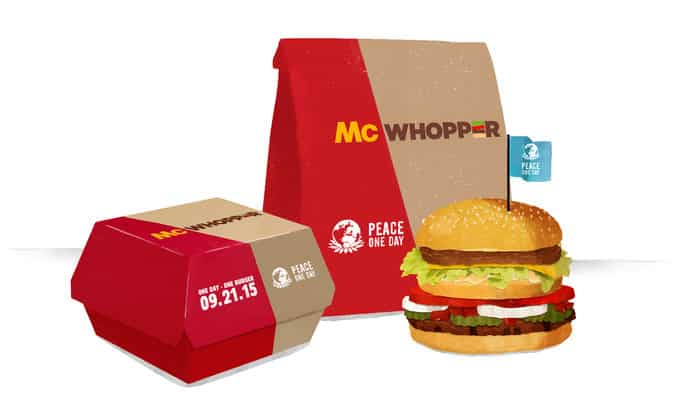 But hey, y’know, September 21 is still a ways away, and we’d love for you to prove yourselves undeserving of our ire by making good of your word and actually coming up with solid action and something really consequential, because, well, you kinda missed the buss when you Noped out of what could have been a beautiful whirlwind romance — or at least,  an amicable ceasefire — with Burger King.

We want some peace between you guys, right here, right now — and yes, we’ll definitely want fries with that.