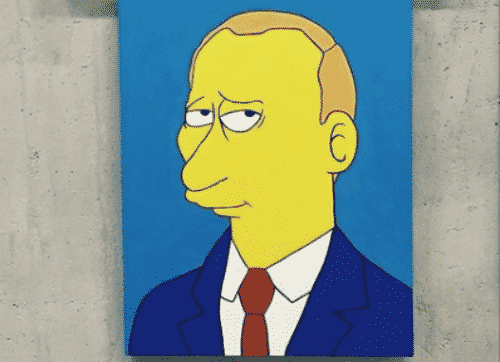 A portrait of Russian President Vladimir Putin as a Simpsons character was stolen from a Moscow business center on Tuesday.

ladimir Putin is many different things to many different people. The polarizing politician has sparked debate and curiosity at home and abroad. Love him or hate him, he’s an icon of Russia’s modern history. One artist decided to render that iconic image in the style of another creator of pop-culture paradigms, Simpson’s mastermind Matt Groening.

Unfortunately, his painting, titled “Man of an Era”, was stolen from a central Moscow business center earlier this week.

The artist behind the painting, Turkmenistan-born Amir Kerr, opened the exhibition at the business center last Friday. The Simpsons-inspired take on Putin was so popular it sold within fifteen minutes of the opening. Afisha Magazine reports the painting was heavily photographed by guests, and enjoyed viral popularity on photo-sharing service Instagam.

Sometime after the exhibit closed on Monday,  thieves broke in and snatched the painting. Only two event organizers and three security guards were present when the theft took place. The thieves are apparently good at what they do. No trace of them has been found, despite the center containing security cameras. Organizers say they couldn’t detect the thieves even after examining hours of CCTV footage.

‘Even after viewing three hours of footage from surveillance cameras,’ said one organizer, ‘we failed to learn the identity of the thief. We have to admit, they worked skillfully.’*

*Quote is paraphrased from original Russian. Original quote can be found here.

Liked this article? Check out these suggestions:

‘Facebook Of Russia’ VKontakte Creator: The Site Is Controlled By Putin’s Friends

The Blood Test, The Swab Test, and The Saliva Test      Essentially, there are three general types of COVID-19 testing produced so far. One is the rapid test, the second is the saliva test and the other is the swab test. The rapid test (also known as the anti-body test) uses blood samples. The swab test… END_OF_DOCUMENT_TOKEN_TO_BE_REPLACED

The COVID-19 pandemic is one of the biggest modern pandemics known in history. Currently, there are more than five million confirmed cases in the world, with a total of 333,000 deaths. A total of 1.6 million of these confirmed cases are in the US alone. The world is currently in a race of finding a… END_OF_DOCUMENT_TOKEN_TO_BE_REPLACED

Despite concrete data and research, people’s opinions will always be diverse when it comes to a variety of topics including religion, politics, gender, and more. Denial is a common reaction to many important discussions and serious world events. The COVID-19 pandemic does not differ from any issues and is subject to opinions from critiques all… END_OF_DOCUMENT_TOKEN_TO_BE_REPLACED

Back in January, when the Wuhan, China coronavirus broke out, it didn’t make it to the front page of newspapers, in print or virtual form. Today, January feels like a lifetime away. Like it or not, people around the world have adapted to the new normal – staying at home, frequent hand washing, and social… END_OF_DOCUMENT_TOKEN_TO_BE_REPLACED

Since the beginning of the year 2020, the whole world has been stupefied by the rapid spread of a deadly coronavirus known as COVID-19. World superpowers in the West were unable to prevent the virus from reaching their borders. Because of this fact, the novel coronavirus COVID-19 became a world-wide pandemic no less than three… END_OF_DOCUMENT_TOKEN_TO_BE_REPLACED

For months since the start of 2020, the attention of the world has focused on immediate response efforts to contain and combat the novel coronavirus, also known as COVID-19. The deadly virus has pushed millions of people into isolation.  This kept people in their homes for weeks and months away from their work, their friends,… END_OF_DOCUMENT_TOKEN_TO_BE_REPLACED