WDBJ Shooter Posted Video of Attack from His POV on...

Roanoke, VA — The alleged shooter of reporter Allison Parker and cameraman Adam Ward uploaded a video of the assault from his POV to YouTube. Former reporter Bryce Williams has been described as “disgruntled” by Virginia police. In addition to the video, Williams posted several rants on his Twitter account before it was suspended. 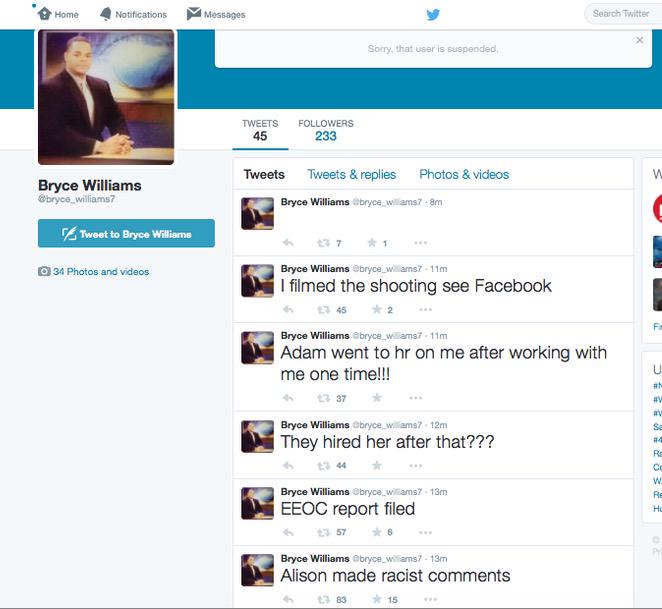 “Police have named a reporter they are seeking in relation to the on-air shooting that left two dead this morning in Virginia.

Vester Lee Flanagan, who is known professionally as Bryce Williams, has been identified by the Augusta County Sheriff’s office.

Sometime between Tuesday night and this morning, ABC News received a fax from someone claiming to be Bryce Williams. It is a lengthy document: 23 pages. ABC News has turned it over to authorities.

Alison Parker, 24, and Adam Ward, 27, were killed in the field during a live news segment in Moneta, Virginia, according to their station, WDBJ-TV, a CBS affiliate serving the Roanoke-Lynchburg television market.

A third person was injured in the shooting, sources familiar with the situation said. Virginia Gov. Terry McAuliffe described the unnamed alleged gunman in a radio interview as a disgruntled employee of the station whom police are currently pursuing, adding that an arrest was “imminent.”

The shooting was reported at 6:45 a.m. and the Franklin County sheriff confirmed that it is considered an active-shooter situation, adding that the suspect is believed to be male.

Franklin County school officials said three schools are on lockdown in the area of the shooting and that police officers are offering additional security.”

After Gruesome Beheading, Arizona Officials Are Rethinking the Way the Mentally Ill are Treated