The older generation had always told us that college was going to be one of the best gifts they could ever give us as their children, even when they pretty much had nothing else to give. We don’t blame them or call them out for it; it’s a loving sentiment borne of their experiences from a time when higher education was one of the best ways to ensure a way out of poverty, or at least a stable adult life. 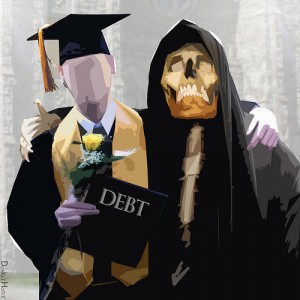 However, times have changed, and the landscape of higher education looks bleaker than it is promising. Despite being hailed as one of the most-educated generations to date, millennials are dropping out of college and taking on low-income jobs to bridge the gap, often with older generations mocking them as “baristas with Ivy League educations”. However, this phenomena has its roots in deeper troubles that aren’t being addressed by the present college system.

Nowadays, colleges are failing to prepare students for the employment arena, and millennials can see that coming from a mile away, with crippling college debt on its shoulders. Universities still train their students to think “within a box”, piling on subjects that may seem vital to the academic arena, but are pretty much useless in the professional one.  ompanies at present are looking more for individuals with skills, not well-rounded ones, and this leaves many college graduates scrambling to find jobs in places where their degrees no longer hold as much value as they did ten years ago. so what happens? Students choose to drop out and seen work experience in “low-key” jobs in hopes of adding more interest to their resumes. Hence, the bitter, biting humor behind memes such as “Old Economy Steven” come as no surprise.

It’s a sad truth that many college students have to face, and still literally pay the price well into their senior years.

So please, the next time you see a millennial working the espresso machine, manning the local bookstore till, or seeing to your convenience, be kind. they just might fighting a battle most of us barely know about.