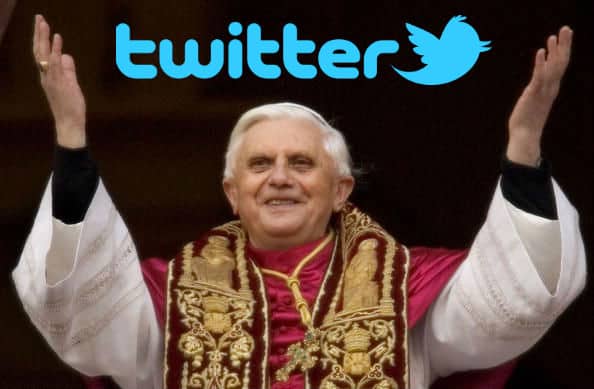 Pope Benedict is officially on Twitter providing a ne way for him to interact with followers. On Wednesday, December 12, the Pope will kick off his account by answering select questions from Twitter users.

The Vatican wants people to send in their questions for the event using the hashtag #AskPontifex.

However, they may have sent out a tweet too early. Tweets have been flooding in under the hashtag with most of them not taking things too seriously.

#askpontifex Who would win in a fight between Jesus Christ and Wolverine?

#askpontifex how many starving children do you think you could feed by stripping and auctioning the Vatican?

#askpontifex as a celibate male who wears a dress, have you noticed any irony when you speak against #equalmarriage? @pontifex

How hard is it to talk about charity and giving *literally* from a Golden Throne? #askpontifex

If bread is the body of Christ and wine is the blood, what are the bones?Almond bark pretzels? #askpontifex

#askpontifex What are your thoughts on the aesthetic comparison of yourself and the Star Wars character, Emperor Palpatine?

Does anyone have to say anything if you sneeze? #AskPontifex

It looks like The Vatican and Pope Benedict will have a lot of scrolling to do.

Presidential pardons are one and many in the history of the US. There are many times when US Presidents granted reprieves for their citizen’s misdeeds. The US President may grant a pardon for any individual, including himself, for any crimes done against the country and its citizens. This issue of Presidential pardons has been trending… END_OF_DOCUMENT_TOKEN_TO_BE_REPLACED

President Biden has tapped Rachel Levine to be his assistant secretary of health, making her the first publicly transgender federal official. In 2017, Democratic Gov. Tom Wolf appointed Levine to her current post, making her one of the few transgender persons serving in appointed or elected positions countrywide. Biden said in a statement: “Dr. Rachel… END_OF_DOCUMENT_TOKEN_TO_BE_REPLACED

The minimum wage hike has always been an issue in the US for the past decades. With only a few hours before Biden gets inaugurated as the President of the United States, people are excited for all his promises to take place. One of these is his plans to raise the minimum wage of workers… END_OF_DOCUMENT_TOKEN_TO_BE_REPLACED