Can You Make Moonshine From Vegemite? [Hoax]

Vegemite, Australia’s favorite breakfast spread, may see a sudden drop in its sales if Australian government officials have their final say.

Indigenous Affairs Minister Nigel Scullion expressed concern over news that indigenous communities were brewing homemade alcohol using Vegemite, and has since been considering to ban the popular spread from ever gracing store shelves and cupboards all over Australia. “Addiction of any type is a concern but communities, especially where alcohol is banned, must work to ensure home brewing of this type does not occur,” the minister said in a statement.

Scullion continued went on to say that it was the vital responsibility of retailers to report suspicious purchases in Aboriginal Australian communities and uphold the common good. 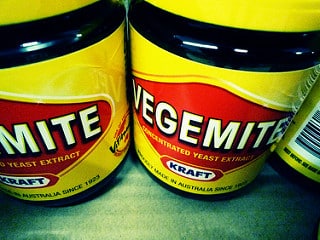 But the burning question on everyone’s mind is: can you actually make moonshine out of Vegemite? Nope. Not even a single drop.

One of the ideas that could easily give way to the misconception is the key ingredient that gives Vegemite it’s peculiar taste: brewer’s yeast. while the name itself does seem to beg to be categorized right alongside hops, beer and wine yeasts — and rightly so, since it does fit the job — the yeast in the spreads has already been deactivated. “trying to extract brewer’s yeast from Vegemite would be like trying to extract an egg from a cake,” Gizmondo explains.

“In short, the yeast in Vegemite is dead as doornails and broken down into what’s not even a vague semblance of the original fungus. If the yeast is dead, there is no way it can produce alcohol. Because it’s dead. Unless they added some live yeast back into Vegemite, and that yeast somehow magically survived the high-salt environment, the sandwich spread almost certainly can’t metabolise sugar.”

While a number of Aussies began to smell lazy fact-checking and the possibility of made-up urban legends that smacked of racism, PM Tony Abbot was quick to assure the population that Vegemite wouldn’t be disappearing anytime soon.

“This is a deregulatory Government and the last thing I want to do is to have a Vegemite watch,” Abbott announced. “Because Vegemite, quite properly, is for most people a reasonably nutritious spread on your morning toast or on your sandwiches.”

So far, there are no claims if alcohol can indeed be brewed from Marmite, Vegemite’s British cousin, but we’re were willing to bet against it.