Is Bacon Better Than Sex? This Graphic Says Yes

Do you love bacon? A good number of us do to, so we think it’s a reason to rejoice, seeing a brand new graphic detailing what happens to your body after enjoying one rasher of bacon.

Created to mirror a viral post of what happens to your body after drinking Coca-Cola, the bacon-loving people over at J & D foods extol the rewarding and addicting effects of bacon for breakfast — starting all the way from inhaling its delicious aroma as you cook a hearty batch for breakfast. 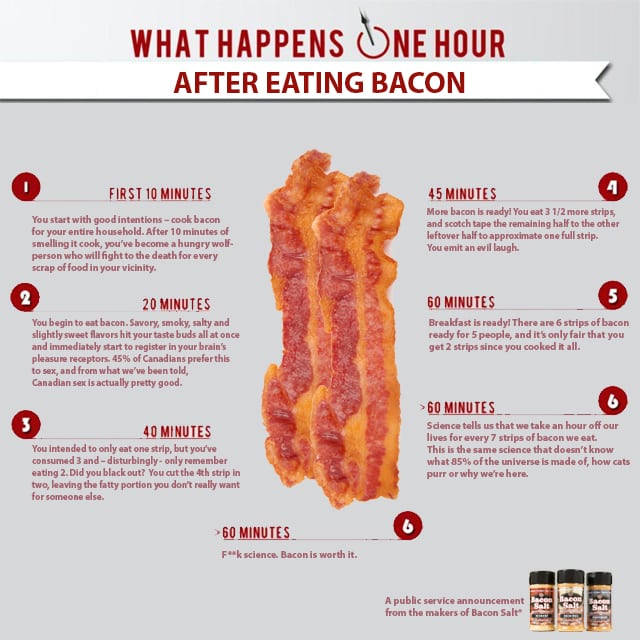 You can almost taste it right in your mouth. (#getinmahbelly!) Reading this infographic, we’ve gotten so into the mental flavor of bacon, we’ve practically lost count of how many hypothetical rashers we’ve just eaten. Seven, or eight? How about a whole plate? To heck with it, bacon is totally worth it.

And it certainly says that bacon is better than sex: It reads “45% of Canadians prefer this to sex, and from what we’ve been told, Canadian sex is actually pretty good.” Hats off to ya, Canadians.

J&D’s Foods has been dedicated to the bacon for as long as it can remember. From tasty foodstuffs such as bacon salt, bacon popcorn, baconnaise, to the wild and wacky items of bacon sunscreen, bacon shaving cream, and bacon-scented pillowcases (nope, we are so not making this up), this company professes its love for the greasy, savory, cured meat proud and true.

It also not without its own hijinks. they’ve held  bacon-vs-mayonnaise wrestling matches to launch their Bacconnaise product, and even had a bacon mascot go crazy in a stadium and do wacky and borderline-illegal stunts, all for the love of bacon. They’ve even been inspired by a Twitter user Kevin whose last name is Bacon (who may or may not be this person) to #HidetheBacon and use images of their Bacon Salt in an array of various flavors and colors to cover exposed celebrity naughty bits.