Model Battles Cancer and Is a New Mom, Poses In...

Latvian-born model Elizaveta Bolukhova is a survivor of the highest degree. 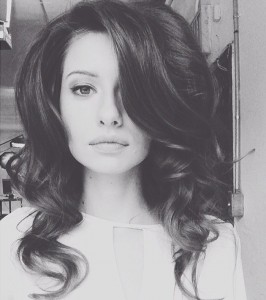 At the age of 24, she was already at the height of her career — jet-setting to cities like Milan and New York to strut on the catwalk, posing for shoots in Harper’s Bazaar and Cosmopolitan. On top of that, she and her partner Roman Troubetskoi were also expecting a baby boy, thrilled to welcome this new bundle of hope and joy into heir lives.

However, it was in 2014 that Bolukhova noticed a painful swelling in her jaw. After months of living with the pain, a diagnosis revealed it to be osteosarcoma, a rare form of bone cancer that attacked and ate away at her jaw bone.

Bolukhova survived a 16-hour surgery that removed 95% of her jaw, and withstood a series of surgeries after to reconstruct it. the doctors advised Bolukhova it would be for the best to terminate the pregancy to prepare herself for chemotherapy.

However, it seems Life always finds a way. “He was very active and I would talk to him often while he was in my womb,” Bolukhova shares. “I had to tell him to stop moving because I couldn’t keep him and then all of a sudden he did. He listened; he stopped moving.” Since her jaw was slow to heal, the chemotherapy was put on hold. At the very last minute, the model was given an offer to deliver her son via C-section. Valentin was delivered ten weeks premature on December 16, 2014. A week after healing from her cesarean procedure, Bolukhova then began her first round of chemotherapy.

“I just told myself whatever the universe has in store for me I will accept it,” she says. “If my baby is meant to be born, he will be born.”

A year after, Bolukhava has now finished her last round of chemo, and has stepped in front of the camera of her friend and Toronto-based pgotographer, Manolo Ceron. Clad in bold, bright makeup, she proudly wears her scars as testament to her story of courage.

‘SpiderDad’ Releases Tribute To Son Who Died of Cancer [Video]