If you’ve ever once indulged in the guilty pleasure of popping your own pimples, we just may have found  the YouTube channel for you. 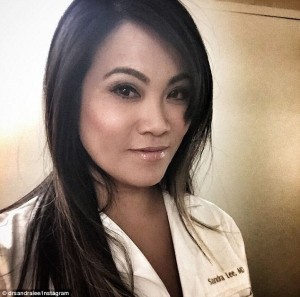 Meet Dr. Sandra Lee. Dr. Lee is a dermatologist practicing at Skin Physicians & Surgeons medical centre in Upland, California. Her sunny disposition and candor have earned her the loyalty and trust of her patients, just as much as the deeply intimate and up-close footage of acne, blackhead, and cyst extractions have thrilled and chilled her Youtube fans the world over.

Dr. Lee, better known by her Internet moniker “Dr. Pimple Popper”, has attracted much attention thanks to her videos of her sessions with a certain Mr. Wilson and his nose. Mr. Wilson has been faithfully attending his treatments with Dr. Lee over six months and five extractions. He sits with a saintly patience through the procedures as deep-seated dirt, sebum, and other gunk are squeezed out of his pores and his nose gradually reshaped.

The video below can be polarizing: it’ll either gross you out, or it’ll answer some strange deep-seated need for satisfaction in you. Either way, do have a care and view at your own discretion. Rated NSFE.

This above video, along with its eight other companions, have been viewed over 1.2 million times on Youtube. Buzzfeed even put their staff to the test and had them watch the infamous videos for the first time, recording their reactions.

And if for some reason you feel the irrepressible need to know the denouement of Mr. Wilson’s nose, you may do so on Dr. Lee’s Youtube Channel.

You may also enjoy:
Lice Take up Residence in Woman’s Eyelid