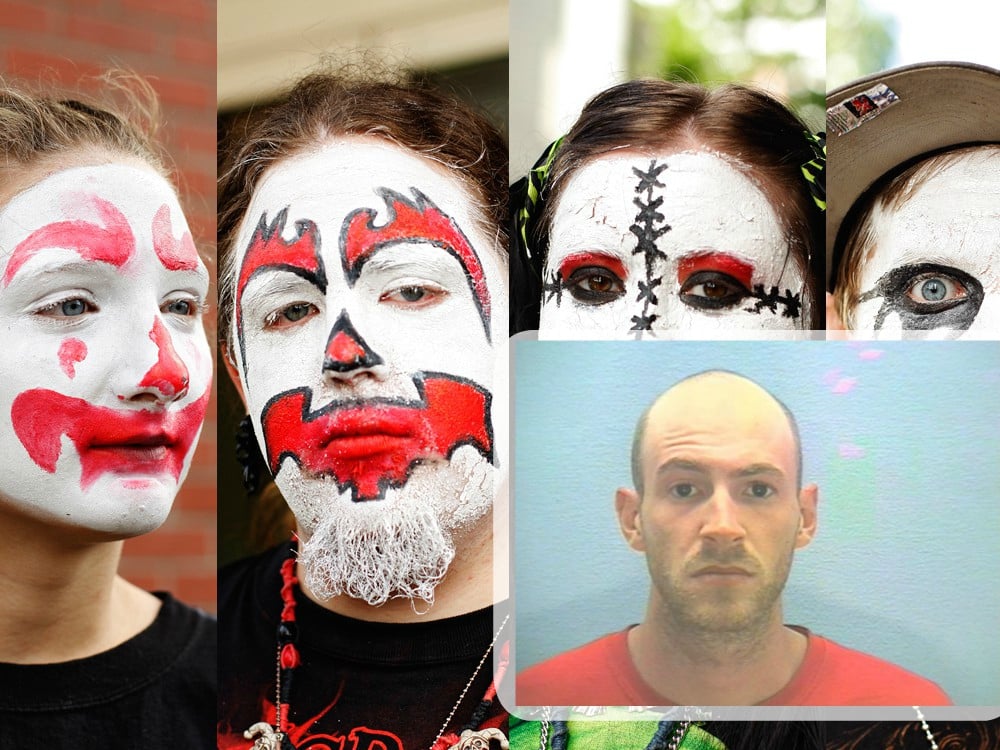 One Ohio drug dealer decided to be upfront about his business.

he annual Gathering of the Juggalos took place at the Legend Valley campground in Thornville, Ohio, from July 22 to 25. It’s a music festival headlined by Detroit horrorcore rap group Insane Clown Posse. Hardcore fans of the group have dubbed themselves “juggalos”, and frequently take to emulating the rappers by painting their faces.

Amidst the scientifically curious, Faygo soaked crowds, one man was apparently hoping to make some extra cash by selling cocaine to concert-goers.  It’s a fairly common occurrence at large festivals, but most drug dealers at least try to hide their illicit business from the cops.

Not so for Daniel L. Drew, who held a handwritten sign reading “Cocaine”. After undercover police officers purchased twenty dollars worth of the drug from Drew, he was immediately arrested. He told a magistrate he “made a bad choice” at the concert.

Believe it or not, he wasn’t the only one arrested for blatantly advertising drugs that day. According to the Newark Advocate, 19-year-old John W. Reardon was charged with aggravated drug trafficking after police spotted him sitting next to a young topless woman with “Molly for sale” written across her chest. Police observed two transactions before arresting the pair.

This Gathering of the Juggalos was the sixteenth in the festival’s history. Despite the somewhat negative media coverage of the fan group, many who self-identify as “juggalos” say the group’s fandom is supportive, positive, and even family-oriented.

Adam Levine Gets Attacked By Fan During Concert, Fans Are Furious [Video]

The Blood Test, The Swab Test, and The Saliva Test      Essentially, there are three general types of COVID-19 testing produced so far. One is the rapid test, the second is the saliva test and the other is the swab test. The rapid test (also known as the anti-body test) uses blood samples. The swab test… END_OF_DOCUMENT_TOKEN_TO_BE_REPLACED

The COVID-19 pandemic is one of the biggest modern pandemics known in history. Currently, there are more than five million confirmed cases in the world, with a total of 333,000 deaths. A total of 1.6 million of these confirmed cases are in the US alone. The world is currently in a race of finding a… END_OF_DOCUMENT_TOKEN_TO_BE_REPLACED

Despite concrete data and research, people’s opinions will always be diverse when it comes to a variety of topics including religion, politics, gender, and more. Denial is a common reaction to many important discussions and serious world events. The COVID-19 pandemic does not differ from any issues and is subject to opinions from critiques all… END_OF_DOCUMENT_TOKEN_TO_BE_REPLACED

Back in January, when the Wuhan, China coronavirus broke out, it didn’t make it to the front page of newspapers, in print or virtual form. Today, January feels like a lifetime away. Like it or not, people around the world have adapted to the new normal – staying at home, frequent hand washing, and social… END_OF_DOCUMENT_TOKEN_TO_BE_REPLACED

Since the beginning of the year 2020, the whole world has been stupefied by the rapid spread of a deadly coronavirus known as COVID-19. World superpowers in the West were unable to prevent the virus from reaching their borders. Because of this fact, the novel coronavirus COVID-19 became a world-wide pandemic no less than three… END_OF_DOCUMENT_TOKEN_TO_BE_REPLACED

For months since the start of 2020, the attention of the world has focused on immediate response efforts to contain and combat the novel coronavirus, also known as COVID-19. The deadly virus has pushed millions of people into isolation.  This kept people in their homes for weeks and months away from their work, their friends,… END_OF_DOCUMENT_TOKEN_TO_BE_REPLACED