“The Book of Mormon” is Smash Hit in Salt Lake...

The hit Broadway musical “The Book of Mormon” has at last come home, and Salt Lake City theatre-goers are loving every minute of it.

“The Book of Mormon”, created by Trey Parker and Matt Stone of “South Park” fame, is a rollicking musical comedy that satirizes a number of Mormon beliefs and practices and was met with cheers and standing ovations. The shows were sold out on its solid two-week run at the Salt Lake City Theater. The two protagonists naive yet fiercely optimistic Mormon missionaries sent to a small village in Uganda, sang against a backdrop of the very same temple that stood practically two blocks away from the theatre. 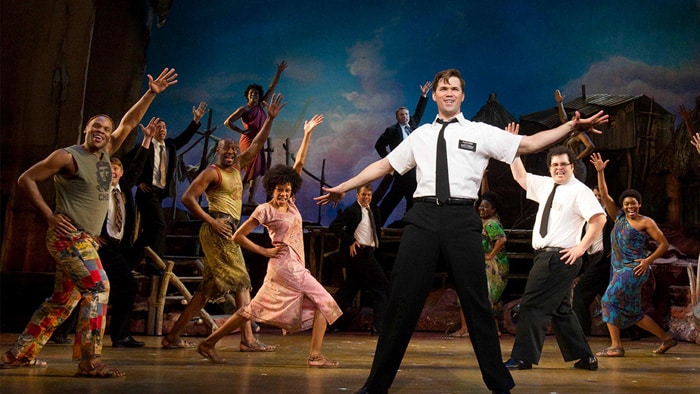 The audience cheered all throughout the musical, and laughed out loud at the jokes that touched on the local Mormon lingo and culture that were so prevalent in the City. They also cheered wildly after the cast sang out a song, “Salt Lake City, the most perfect place on Earth”.

So I’m seeing Book of Mormon at this very moment, in the first row…

Watching @BookofMormon in SLC is like in a rock concert when the band says the name of the town where they’re playing, but for 2-1/2 hours.

Despite the shows biting satirical humor, audiences left the theatre in good cheer and high spirits. There were even three advertisements of the church in the playbill, including one that read “You’ve seen the play, now read the book”.

“The humor is crude and offensive, but I don’t think it’s meant to attack or belittle Mormons,” said Omar Ledezma Soto, a student at Mormon-owned BYU. He came and wowed his fellow audience members dressed as a missionary, in an ensemble of white shirt, black tie, and even his own nameplate from his missionary days. “It’s just a means to talk about the silly situations we put ourselves in. That’s why I think this is so funny and lethargic and freeing to me.”

The creators Parker and Stone were not at the show, but expressed to the media how validating it was to finally bring it home.

“”It feels like a really cool thing that it finally gets to play Salt Lake City,” Stone said. “It just feels very much like it’s coming home.” they had indeed hoped that the move, despite it being a potential risk, would draw more laughs out of an audience who understood the Mormon culture at a deeper level than any other audiences. “It’s like playing Fiddler on the Roof to a bunch of Jews,” Parker said.