Laura Kate Berry wanted to celebrate on payday, and decided a brand new pair of Topshop Jaime jeans was the best way to treat herself. However, something in the shop displays made her pause to think.

She later gave voice to her opinions on Facebook.

The post features the lower torso and legs of one of the boutique’s mannequins, and comes with a plea to be rid of the style of mannequin. She says “it is quite frankly ridiculously shaped. … Not one mannequin in your store showed anything bigger than a size 6.” She said the whole thing caused her to use her “size 10/12 legs to walk straight out of your store.”

“I’m calling you out Topshop, on your lack of concern for a generation of extremely body conscious youth,” Berry continues. “I’m old enough and wise enough to know I will never be this size, but as we’ve all been impressionable teens at one point, I’m fairly certain if any of us were to witness this in our teenage years, it would have left us wondering if that was what was expected of our bodies.”

She also explained that such tiny-bodied mannequins can be harmful to young women, specially at such impressionable ages where their body images are constantly under attack from photoshopped and altered body images, on TV, in print, and in many other forms of media. 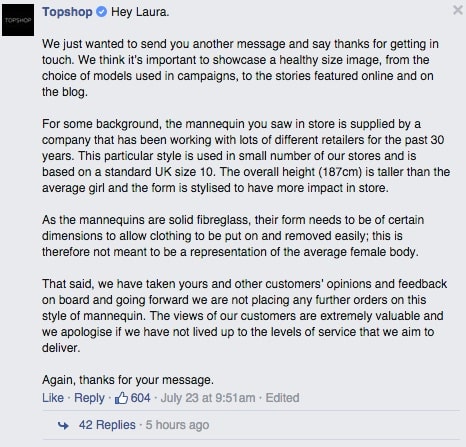 Many replied that the mannequin didn’t look like a size ten. Nonetheless, it is worth acknowledging the commitment to changing for the ebetter that TopShop is making.

Topshop is not the first brand to take action on skinny mannequins. Stores such as La Perla, Whistles, and New Look have all vowed to change their mannequins after customers have complained about their unrealistic body proportions.