Internet users are spending an increasing among of time on social networks while Facebook has failed to capitalize on that growth according to a recent Nielsen report.

The study found that while tablet use for social media networks nearly doubled year-over-year from 23 minutes in 2011 to 41 minutes in 2012, Facebook experienced 4 percent fewer unique visitors on its social platform.

Smartphone users were also using social media more in 2012, however their five minute use time was up only marginally compared to 2011 numbers.

Facebook continued to dominate the social media space, followed by blogger in second place, although both of those sites managed to decrease engagement numbers. Seeing the largest increase was social sharing network Pinterest which increased its Desktop visitors base by more than 1,000 percent after coming out of private beta testing. Pinterest also increased its mobile Web users by more than 4,000 percent.

You can read the full Nielsen social engagement report HERE. 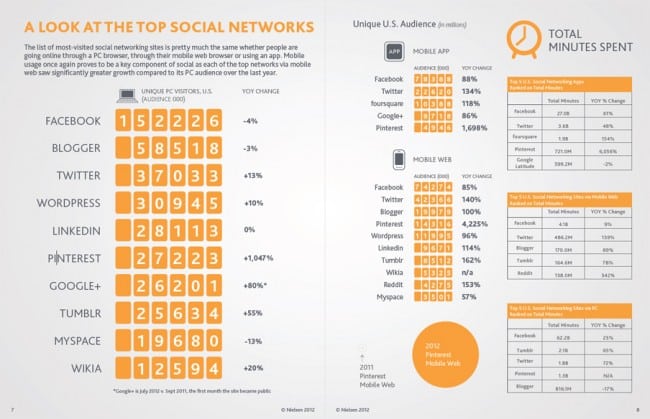