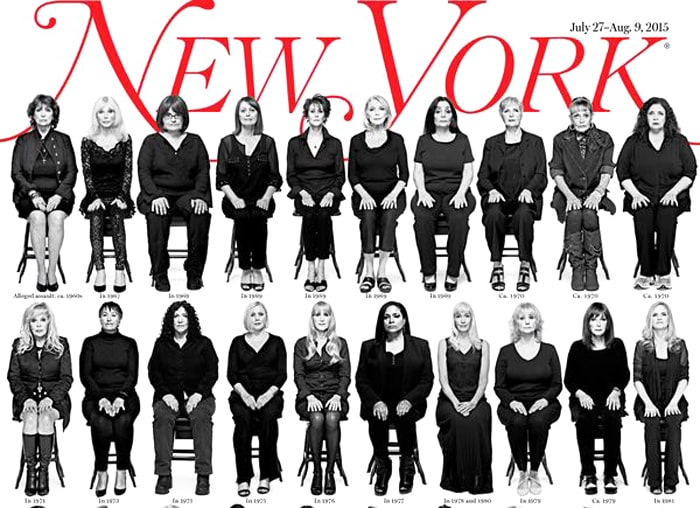 These women are breaking the silence and taking a stand.

Now york Magazine took a bold move to feature the 35 women who have said they have been raped or assaulted by Bill Cosby on its front cover. These 35 women have stepped out of the shadows to publicly accuse the comedian of sexual assault during his career on television. It is believed that there are more who remain silent, hence the empty seat.

35 women tell their stories of being assaulted by Bill Cosby. A project 6 months in the making http://t.co/C5ussU3ocj pic.twitter.com/EyfAtMqf5b

The cover story was a project 6 months in the making. “All 35 were interviewed separately, and yet their stories have remarkable similarities, in everything from their descriptions of the incidents to the way they felt in the aftermath,” the magazine reads. “Each story is awful in its own right. But the horror is multiplied by the sheer volume of seeing them together, reading them together, considering their shared experience.”

At present Cosby denies the charges of rape and assault by these women, and has not been charged for the crimes. In an earlier deposition, he does acknowledge the he gave the women strong doses of Quaalude, “the same as a person would say have a drink”, but stands firm that he did not rape any of them.

These 35 women have entirely different story to tell.

These women all come from different states, different backgrounds, and different walks of life. They each have a different start to their story; however, they all end on a chillingly similar note. Of common note is how they were were invited to dine with him, join him in his home or his hotel room, given them drugs and assaulted sexually.

“The women have found solace in their number — ,” NY Mag continues, “discovering that they hadn’t been alone, that there were others out there who believed them implicitly, with whom they didn’t need to be afraid of sharing the darkest details of their lives.”

Presidential pardons are one and many in the history of the US. There are many times when US Presidents granted reprieves for their citizen’s misdeeds. The US President may grant a pardon for any individual, including himself, for any crimes done against the country and its citizens. This issue of Presidential pardons has been trending… END_OF_DOCUMENT_TOKEN_TO_BE_REPLACED

President Biden has tapped Rachel Levine to be his assistant secretary of health, making her the first publicly transgender federal official. In 2017, Democratic Gov. Tom Wolf appointed Levine to her current post, making her one of the few transgender persons serving in appointed or elected positions countrywide. Biden said in a statement: “Dr. Rachel… END_OF_DOCUMENT_TOKEN_TO_BE_REPLACED

The minimum wage hike has always been an issue in the US for the past decades. With only a few hours before Biden gets inaugurated as the President of the United States, people are excited for all his promises to take place. One of these is his plans to raise the minimum wage of workers… END_OF_DOCUMENT_TOKEN_TO_BE_REPLACED