Part Football, Part Bowling, is Fowling the Next Big Thing?

by Timothy Bertrand 8 years ago11 months ago

A Detroit-area entrepreneur introduces the world to a new sport: fowling.

ome of us are born with natural athletic ability. Others have to make due watching from the sidelines. Some of us fake our way through it to fit in (“Did you see that ludicrous display last night? What was Wagner thinking sending Walcott on that early?”) But few of us become athletic innovators, entrepreneurs for an entirely new kind of sport.

Well, it isn’t always brand new. Sometimes it’s a simple combination of two different but complimentary sports (Frisbee-golf anyone?). In the case of Chris Hutt, even two wildly different games like American football and bowling are fair game. In fact, the odd combination might be catching on in Detroit.

Chris Hutt owns and operates the Fowling Warehouse, a 34,000 square-foot former industrial site in the Hamtramck area of Detroit. It’s devoted to the football/bowling hybrid sport Hutt and his friends invented years ago while tailgating at the Indianapolis 500. They dubbed the sport “fowling”, and it was evidently popular enough to inspire the business venture.

The Fowling Warehouse features twenty lanes where “fowlers” try to be the first to knock down all ten of their opponents bowling pins with a football, thrown from a distance of about forty-eight feet.

While the rules may be simple, the game is apparently pretty difficult to master. In the first six months of operation, the Fowling Warehouse has only seen 29 strikes in the over 100,000 games played. But strikes aren’t the only way to win a fowling match. A shot called a Bonk occurs when a fowler knocks over the middle pin (and only the middle pin) off the board on their first throw. The other nine pins have to remain untouched. If you pull it off, you get to “honk your Bonk”, or sound a freighter horn that sits at the bar. Hutt says the sound is deafening, but it lets “everyone know … that you’re the coolest person in the room.” Hutt says the Fowling Warehouse records around sixty bonks a month.

Peter Grace, a local Detroit resident, celebrated a friend’s birthday with a trip to The Fowling Warehouse. “it’s just a great place to hang out,” said Grace. “It’s the best of both worlds. You’re bowling and you’re playing football at the same time.”

Hutt wants to expand his business and bring fowling to a nationwide audience. “This will work in any major city,” he said, “and we really want to target the college towns.”

College towns are indeed a good market for novelty sports. Take, for example, Muggle quidditch. Fans of the Harry Potter book series no doubt recognize the name immediately. Only the high-altitude acrobatics have been replaced with simple, non-enchanted broomsticks that (unfortunately) stay on the ground. 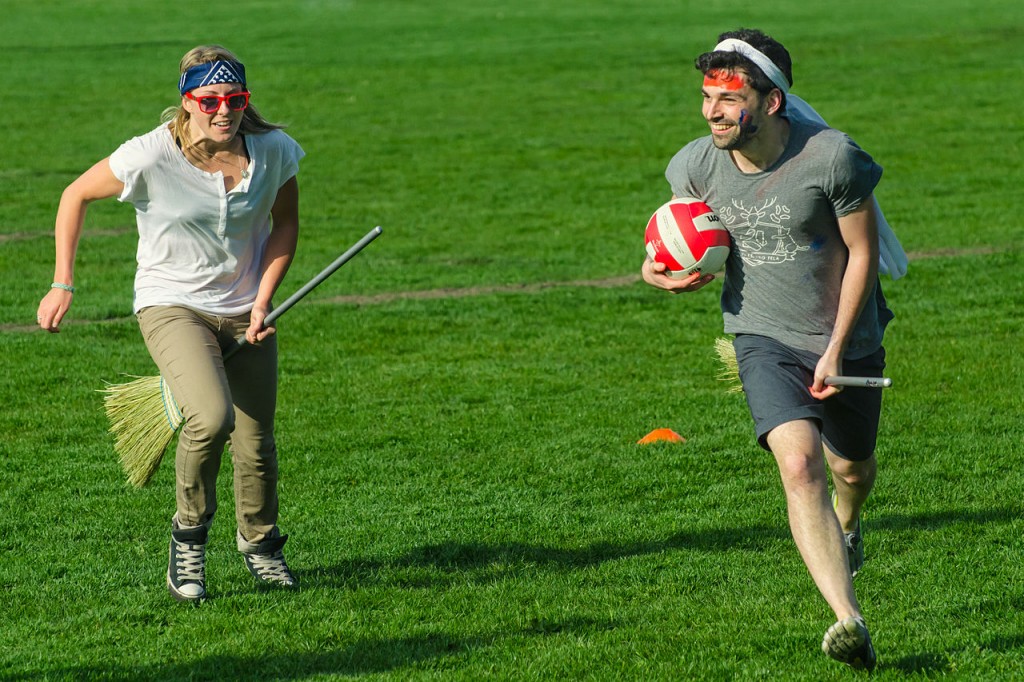 The rules are pretty much the same as the fictional sport from the book. To score points, chasers or keepers must get the quaffle (a slightly deflated volleyball) into one of three of the opposing hoops. The game ends when one of the seekers catches the snitch, a tennis ball placed at the bottom of a yellow long sock, which is attached to the back of a “snitch runner’s” shorts. The “snitch runner” may do anything in their power to keep the snitch from being caught.

Weird Al Is at It Again: Sports Teams, Ready to Take the Ridicule?