It seems many were fooled by a bogus news story that circulated the Internet. The story alleged that Twitter had received a $31 billion buyout order. The story was rigged to appear like it came from the credible Bloomberg News website, however it was a fraud. 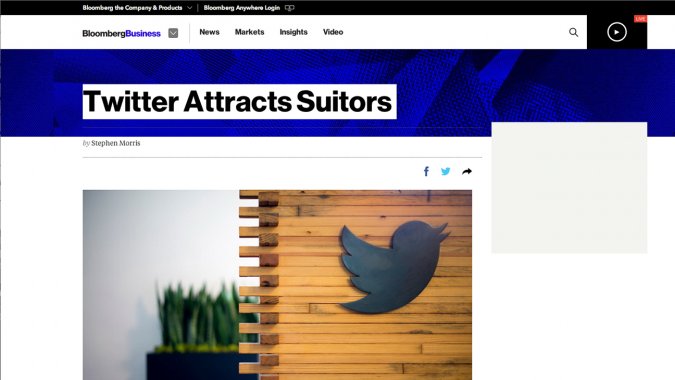 While the article was a masterly planned hoax, there were some red flags. For example, Twitter’s CEO’s name was misspelled in the story. Usually, big typos or mistakes like that are huge hints that something fishy is going on. There was also a huge difference in writing styles. Bloomberg is usually written with a dry, straight-to-the-point style. With the title, “Twitter Attracts Suitors,” this article was the opposite. The page was even more misleading because it also contained numerous links that led the visitor back to the real Bloomberg website.

After the article appeared last week, Bloomberg and Twitter representatives were quick to point out the fake.

“The story was fake and appeared on a bogus website that was not affiliated with Bloomberg,” said Ty Trippet, a Bloomberg spokesman.

However, the story still spread like wildfire. In fact, Reuters reported that Twitter’s stock rose by 8.5 percent that morning alone.

There were people that weren’t easily fooled.

Man, all the Bloomberg style violations in the fake Twitter story.

The legit Bloomberg reports that the U.S. Securities and Exchange Commission (SEC) is looking into the possible pump-n-dump market manipulation.