The hashtag #Curvy has been added to Instagram’s banned list of search terms, which includes #sex, #nude, and #thinspo. Upon searching for the hashtag, users are greeted with a list of similar search terms, but #curvy is nowhere to be found. 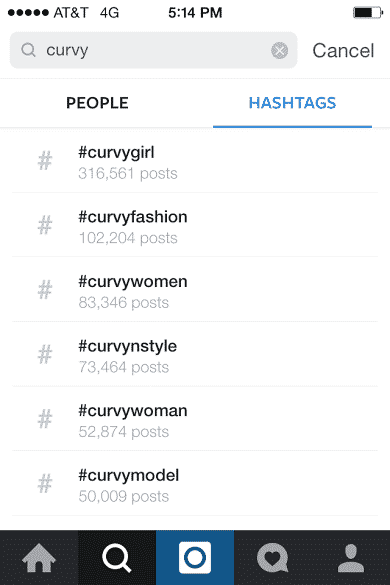 A spokesperson for Instagram told pop news site Buzzfeed that the hashtag was removed because it was being used to share images and videos that violated Instagram’s community guidelines, which strictly forbid nudity, but curiously allow for plenty of non-nude sexual content. “I can confirm that we did block the hashtag #curvy. It was being used to share content that violates our guidelines around nudity,” they said. “Please note that the block has nothing to do with the term ‘curvy’ itself.”

And yet, many users couldn’t help but feel puzzled about the decision, saying that the generally body-positive and barely sexual #Curvy was harmless when compared to something like #thinspo, a now banned hashtag which started with the good intention of motivating people to lose excess weight, but eventually degraded into a cruel culture of body shaming and glorifying anorexia.

It shouldn’t come as a surprise to anyone who keeps up with Instagram’s strange, draconian rules about nudity. “Women are regularly kicked off Instagram for posting photos with any portion of the areola exposed,” said Scout Willis, daughter of actor Bruce Willis, “while photos sans nipple – degrading as they might be – remain unchallenged.”

In the case of Sam Roddick, an artist working out of London, England, even posting a picture of something that resembles a taboo body part can apparently get you banned from the service.

Instagram deactivated my account &told me it will never be activated again due to this image – they are misogram pic.twitter.com/T8aRtKSEnD

For Roddick, the banning of #Curvy is symptomatic of a larger problem with the world’s most popular picture sharing app. She told the Huffington Post UK that the recent hashtag banning, along with the ongoing nipple controversy, is yet another step-backward for the social media giant, whose community guidelines have come under fire for discouraging body positivity:

“They have banned images of breast feeding, stretch marks, domestic images of menstruation and classical art works that respectfully portray nude women and now they ban the hashtag #curvy. While they allow bitch, fat slag, hookers, thin — this is not a safe platform for women and especially young girls (as we all know Instagram is populated with nude images of young women effectively selling themselves sexually).”

“While the block may not have anything to do with the term ‘curvy’ from Instagram’s perspective, it does present a problematic possibility: that images with the hashtag don’t necessarily violate the nudity guidelines more often than other suggestive hashtags, but that these #curvy photos are simply more likely to be reported by users.”

Despite the inconsistency in enforcing them, Instagram’s community guide lays out the following guidelines for posting images that contain nudity:

“We know that there are times when people might want to share nude images that are artistic or creative in nature, but for a variety of reasons, we don’t allow nudity on Instagram. This includes photos, videos, and some digitally-created content that show sexual intercourse, genitals, and close-ups of fully-nude buttocks. It also includes some photos of female nipples, but photos of post-mastectomy scarring and women actively breastfeeding are allowed. Nudity in photos of paintings and sculptures is OK, too.

People like to share photos or videos of their children. For safety reasons, there are times when we may remove images that show nude or partially-nude children. Even when this content is shared with good intentions, it could be used by others in unanticipated ways.”

Check Out These Creepy Items You Can Buy On Instagram