What Happens When You Put a GoPro on a Jedi?

A long time ago in a galaxy far, far away…

Over the course of seven Star Wars films, we’ve seen our fair share of lightsaber combat. Yet for all the dueling, laser deflections, and force chokes, we’ve never seen lightsaber combat from a first-person point of view. Even the video games don’t really provide that.

Maybe that’s why YouTuber Bill Parker decided to strap on a GoPro and take on some Imperial Forces. Watch until the end for an awesome cameo of a ship that made the Kessel run in less than twelve parsecs.

The video begins with the Jedi taking out some easy targets: stormtroopers. No big deal, those guys couldn’t hit the broad side of a rancor. Unless, of course, you subscribe to the theory that they were intentionally missing the heroes of A New Hope. Attractive as that theory is, don’t forget the man who created Star Wars also gave us Indiana Jones — films full of a different kind of stormtrooper who never quite got the hang of the whole “aiming” thing.

Soon, the Jedi graduates to harder targets that run the gamut of the Imperial armed forces, like speeder bikes, a TIE Fighter, and an AT-AT. Just when it looks like all hope is lost, a squadron (perhaps a… rogue squadron?) of X-Wings show up to save the day, accompanied by none other than that infamous “piece of junk”: the Millennium Falcon.

We’ll get to see plenty of first-person action this fall with the release of Star Wars Battlefront. The long anticipated follow-up to the classic action/strategy games will not only let us experience some of the most iconic battles from the Star Wars trilogy, but also the yet-to-be-seen Battle of Jakku, which is supposed to have happened between Return of the Jedi and the upcoming Star Wars: The Force Awakens.

Also read: Why Fallout Is Better Than The Elder Scrolls

Speaking of The Force Awakens, the 2015 Comic-Con panel revealed some pretty interesting stuff about the new film — including a look at some new characters.

Exclusive behind the scenes footage revealed this scruffy pair. Nobody is sure who they are yet, or even if they’re important to the story, but there’s a certain Jabba the Hut vibe going on, or perhaps a throwback to the classic Mos Eisley Cantina scene. Either way, the traditional prosthetic costume is a great reassurance to fans hoping director J.J. Abrams would stick to using practical special effects.

Those who attended the Star Wars panel also saw a familiar face.

Yup, that’s Simon Pegg. Nope, he isn’t just visiting the set. He’s actually playing a creature. What creature, and how important the character is to the rest of the film, wasn’t revealed. But you can’t help but smile at the thought of Abrams giving his dear friends the once-in-a-lifetime chance to be part of the legendary franchise.

According to IGN, Warwick (who played the Ewok Wicket in Return of the Jedi) will be joining the Star Wars universe once again as a new creature, or maybe Wicket again, nobody really knows. In any case, it’s heartening to see so many people involved in the original films coming back for this new production. Now if we could just get a sequel to Willow…

Finally, J.J. Abrams confirmed that a cut of the film had been completed. 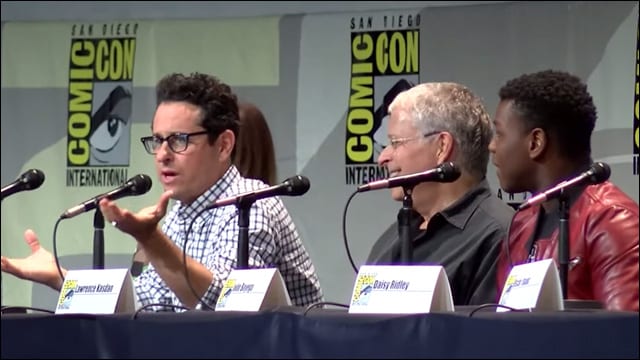 Abrams told fans and journalists (which are often one and the same at Comic-Con) that a rough cut of the film had been completed. He said the production team is now in the process of refining it into the finished product. “The only mandate we had is [to ask ourselves] ‘what delights us?’” Abrams said. “It doesn’t have to be fun all the time or ever silly, but it has to be compelling. We treated films four, five, and six, the films that I grew up with, as canon. And it’s crazy to be writing a script with Lawrence Kasdan and ask, ‘What would Han Solo say here?’ and have Kasdan just know, ‘Well I’ll tell you what Han would say here.’”

Here’s hoping the new film isn’t a let-down. We’ve been burned before, but from everything we’ve seen so far—it may just be a new hope.

Build Your Own Star Wars Droid In Just One Day [Video]