How to Put out a Fire with a Motorcycle [Video]

The art of extinguishing fires employs many techniques. There’s the traditional water and foam, fighting fire with fire, the under-appreciated science of fire distinguishing… 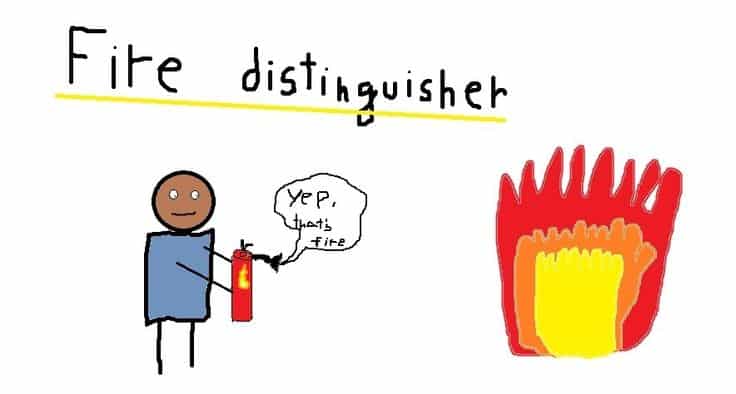 But no firefighter we could find recommends the technique you’ll see in this viral video: putting out a fire by running over it with your motorcycle. Check it out:

“I guarantee I can put out that fire with this motorcycle.” A man’s voice says. “Watch and learn, kids. Watch and learn.” After seemingly extinguishing the flames, the rider is totally oblivious to the fact that his bike is rapidly catching fire itself. “I think the bike’s on fire!” Says another man. “Of course I’m on fire, baby, that’s how you do it!” Replies the rider.

“The bike’s on fire, Hardy!” A woman screams. “You’re on FIRE! You’re on FIRE!” The rider seems to notice something is wrong, and says “Oh, you mean I’m actually on fire.”

It’s all fun and games until your motorcycle catches fire. “That went how I thought it would when I read the title”, said one YouTube commenter. But this motorcycle isn’t the only unusual vehicle being used to fight fires. Check out this dump truck the Grand Rapids Fire Department converted into a fully-operation fire engine:

Pretty cool, right? According to Fire Rescue 1, the truck was built after several motorists collided with firetrucks. “Three crashes where drivers struck fire department vehicles used for blocking traffic had taken place during a recent eight-month span, causing about $150,000 in damages,” says an article about the truck. “The department converted a dump truck that the city’s water department no longer wanted, and rigged it with shock absorbers in the back, a flashing arrow sign on the rear and the paint, chevrons and emergency lights typical of fire trucks, according to WOOD.”