Meet the Guy Who Plays Two Guitars at Once [Interview]

Last week, we told you about Luca Stricagnoli, the Spanish guitarist who can tap out a beautiful cover of Guns n’ Roses “Sweet Child O’ Mine” with not one, but two guitars—simultaneously. He uploaded a video version of the song earlier this month, and it’s been making waves online.

On Friday, I spoke with Luca about his personal journey to become a musician, starting with classical training when he was very young. “I started studying classical guitar when I was 11 years old,” he said, after apologizing for his broken English. “As soon as I discovered that it’s possible to live through music I immediately wanted to become a concert player, but something happened along the way. I totally quit music at 16 and I dedicated myself to judo.” 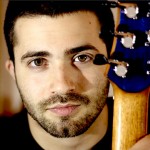 “I think it was the impossibility for me to express myself in a proper way with classical music. My teacher was amazing and I respect classical music a lot, but I guess it was not for me and I discovered why very recently. My relationship with guitar is very particular and delicate and if I force myself [to do] something I really don’t want to do, I explode. At that time I thought my passion was totally finished, but now I know that I just have to find different ways to express it.”

Having abandoned his musical calling, Luca occupied himself with martial arts. “I loved judo a lot and I started doing competitions,” he said. “I didn’t achieve any important results, judo isn’t something you learn in three years and become a champion (it’s full of talented athletes), but I was improving and I was very motivated.”

“Guitar is where my heart is.”

Luca told me his musical ambitions were on hold until 19, when he finally picked up a guitar and started playing again. “When guitar came back in my life,” he said, “it was like receiving a strong hit. I thought for a while and I understood what I really wanted to do. When I started playing again I was still doing judo and I remember all of my judoka friends telling me ‘you should play guitar because there’s where your talent is’. I don’t know if it’s correct to talk about talent, but I’d like to say that guitar is where my heart is.”

“At 19 I started playing again, inspired by Candyrat Records‘ videos (a friend of mine showed them to me) and I remember having so much admiration for Candyrat’s artists that I wanted to become one of them. My dream, at that time, was being part of that label and [becoming] a world-wide-admired guitarist, so I started teaching myself new techniques from YouTube. I remember abandoning all the studies to totally focus on guitar, and a few years later I managed to become a Candyrat Artist. When my first video was uploaded on the label’s channel it went very well, so I started thinking that maybe I really had a chance to live thanks to my passion and I kept putting all of my energy into it.”

“We did a story last week about your Sweet Child o’ Mine cover, and people were just astonished at how well you multi-tasked playing two guitars like that. What made you want to perform that cover? Can you tell me a little about the technique that goes into tapping on two guitars simultaneously?”

“I’m really glad that I had a positive reaction and the arrangement was not mischanged [sic] for a ‘show-off’. I decided to arrange Sweet Child O’ Mine because I like that song, but most of all because of its structure.”

Luca told me the Guns n’ Roses song posed a particular challenge. “Slash plays his famous riff on four strings while the bass is doing another melody,” he said. “Then, we have a modulation in minor, which isn’t an easy thing to do when you want to add percussion and many other things and your guitar is tuned for [the] beginning of the song.”

In order to pull the cover off, Luca had to think outside the box. “I didn’t find a proper way to play everything on a single guitar, so I tried to find a solution and I slowly came up with the ‘special-made’ guitar, and the capo changing in the middle of the piece. With this technique there’s a chance for the two hands to play in an independent way like pianists do, and it’s possible to add percussion too.”

“It would be wonderful if everyone tried to bring something new to this instrument.”

Luca’s years of hard work are finally paying off. This year, he released his first LP with Candyrat Records. It’s mostly comprised of the covers that made him a sensation on YouTube, but also contains two original compositions called “Us” and “The Future”.

I asked him about his plans for the future, and what’s next for him.

“I have a long list of tours and that makes me really happy and thankful towards all the people who enjoyed my works and made this possible. Lots of things happened in just a few years, and I’m still not used to all of this, so I really want to enjoy the concert player life and give as much energy as I can to everyone who comes and listen to my shows.”

“Also,” he adds, “I’d like to always find a way to come up with new ideas and avoid remaining [stuck doing] the same things forever.”

Finally, I asked him if he had any advice for up-and-coming musicians.

“I feel like lots of things have been [said] in music, and the guitar has been explored in many ways.” He said. “It would be wonderful if everyone tried to bring something new to this instrument, experimenting a lot and trying to find different ideas. I would tell young guitarists to look at music, and at guitar, with a really open mind and find their own path, instead of being necessarily satisfied with things that exist already.”

Britney Spears’ Music Video For “Oops!… I Did It Again” Without Music Is The Greatest [Watch]