Most social networking platforms don’t allow users to create an account if they’re under the age of 16. But there actually is a social network for kids ages 5-13 called Everloop, and the service has grown recently with the launch of Everloop Goobit, the first mobile social app for kids.

Everloop Goobit allows users to post, comment, share, and “like” things on their own threads (called “loops”) or others at their discretion. Goobit also allows users to decide which loops they want to post to (in contrast to Instagram, which makes all posts accessible to every one of each users’ followers). This feature allows users more privacy than other social networks, giving them the ability to share posts and photos with as few or as many friends as they want.

“Our goal for Goobit was to combine the key social features kids are looking for on a mobile device into one easy app,” says Hilary DeCesare, CEO and Co-Founder of Everloop. “Now, kids can stay in touch no matter where they are using a safer, secure and fun resource that’s truly the first-of-its-kind.”

Perhaps the most unique aspect of Everloop Goobit is the “Goobs” feature, a practical joke system exclusive to Everloop users. Users “Goob” each other, by splattering virtual bugs or “toilet papering” each others screens. As you can imagine, “Goobs” is a fairly popular feature.

Though you might think that a social network just for kids sounds like a great idea, there’s at least one elephant-in-the-room concern that prompted some skepticism in us: That of safety and security. Everloop addresses safety concerns frequently in their press materials and on their homepage, and to gain extra clarity on the protocols in place, we spoke with Jon Morse, Everloop’s VP of Mobile and Platform Product Development.

Everloop’s Safety and Moderation platform is in compliance with the Children’s Online Privacy Protection Act (COPPA), uses several filters for chats and posts, moderation of text, photos, and videos, parental authentication, and and ability for users to flag content that bothers them. 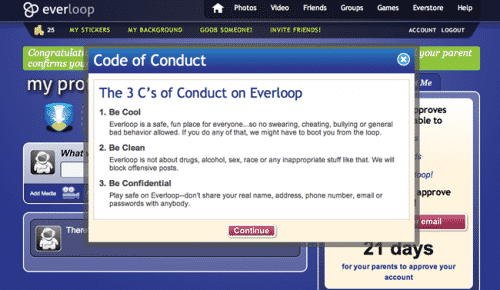 Everloop uses a Parent Panel, allowing parents quick and easy access to their children’s accounts. They can manage privacy settings and monitor activity. Parents also have to authenticate their child’s account before they are allowed access to the service using the last four digits of their social security number or a $1.00 charge to a credit card.

Everloop’s security team relies on user moderation to keep track of flagged posts, and has a team of community moderators in place to manage inappropriate behavior. Inversoft CleanSpeak intelligent filtering uses blacklist and whitelist technology to moderate profanity, and the support team actively looks for alternate spelling for profanities and other ways “around the system” to keep kids safe.

All of these protocols keep Everloop and Everloop Goobit from becoming what I called “Reddit Jr.” in my chat with Mr. Morse, but what about external threats? My greatest concern regarded predatory users that would sneak past the system under the guise of a child to prey upon the service’s users.

Mr. Morse concurred with my concerns, and noted that this type of thing does happen from time to time. While no social network or service can be 100% safe and secure, Mr. Morse said that Everloop does as much as it possibly can to keep kids using their network safe, and even confessed that regarding sexual predators, tracking and banning them if they manage to create an account is not as hard as we might think, because sexual predators follow a pretty formulaic pattern online.

Everloop users are prevented from sharing personal data like addresses and phone numbers on their accounts and requests for correspondence outside of Everloop are flagged by moderators. The Parent Panel provides a second wave of protection in this regard as well. Predatory correspondence is usually picked up quickly, and such users are banned from the service.

Additionally, the kids themselves provide a front-line of defense against predators and even other users by flagging content. Mr. Morse said that a majority of kids using Everloop want to keep the service safe and fun, and frequently flag inappropriate or predatory content. Just as it was mine, Mr. Morse said that safety is Everloop’s number one concern.