It seems this week has seen quite a rise in audience members behaving badly.

During a performance of the Broadway comedy “Shows for Days“, the two-time Tony winner went over to a lady in the audience who had been visibly texting fro majority of the show, grabbed her hand, and the phone. She later went back onstage, and gave the confiscated mobile to the stage manager to hold onto and return, but only after the performance.

And the best part? Never once did she ever break character. 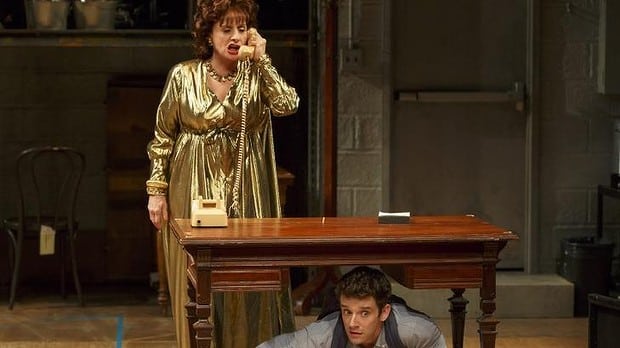 “Shows for Days” is a Douglas Carter Beane memoir that recounts the misadventures of a young playwright working in a struggling community theater. LuPone plays an over-the-top artistic director, and she chooses to interact with one audience member, usually seated in the first row, during a silent bit. This time, however, the texting woman presented an opportunity ripe for teaching, no matter that she sat right in the middle of the seats.

“It was the fastest sleight of hand ever,” LuPone told Joe Dzimianowicz of Daily News on Thursday. “I shook her hand with one hand and took her phone with the other. Took it. I didn’t grab. I thought, ‘Holy s—, that was easy.’”

Later, LuPone released a statement on the appalling incident:

“We work hard on stage to create a world that is being totally destroyed by a few, rude, self-absorbed and inconsiderate audience members who are controlled by their phones. They cannot put them down. When a phone goes off or when a LED screen can be seen in the dark it ruins the experience for everyone else — the majority of the audience at that performance and the actors on stage. I am so defeated by this issue that I seriously question whether I want to work on stage anymore.” she said. “Now I’m putting battle gear on over my costume to marshal the audience as well as perform.”

Patti LuPone forsaking the stage because of audience bad behavior?! For shame, audience, for shame.

The other audience members took their shock — and approval — to the Twittersphere:

THAT TIME YOU STAY FOR THE 2ND ACT & WATCH PATTI LUPONE TAKE A TEXTING WOMAN’S CELLPHONE FROM THE AUDIENCE & WALK OFF STAGE WITH IT IN HAND.

@HeyCatu I was in seat F2. Everyone on my row was like Whaaaaaaaaaa? Oh no she didn’t oh YES SHE DID!!!

Did Patti LuPone give the phone back? Of course, she did.

“I have no idea what the house manager said to the woman when he returned the phone,” she says. “But I said, ‘Please make her feel bad.’ ”