ISHIKAWA, Japan — It’s not usual for fine wines to fetch a fair price, but how about grapes? In Japan, a bunch of ruby romans, a breed of grape grown in the Ishikawa prefecture, fetched a record-breaking sum of 1 million yen ($8,200) at auction. There were twenty six grapes in the bunch, making each one worth about three hundred and fifteen dollars. Last year, a bunch of the same breed sold for 550,000 yen, or about $4,530 dollars.  So, why would anyone fork over the equivalent of about 2,700 pounds of average-priced grapes for a single bunch? 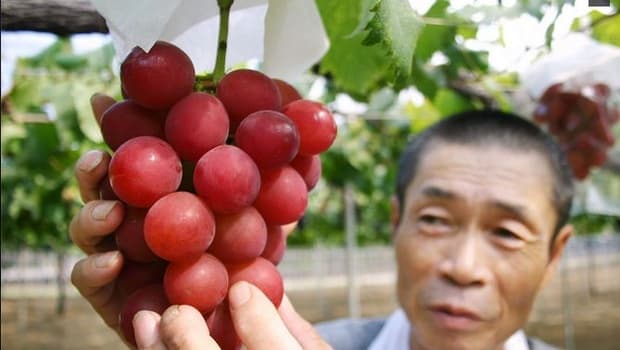 According to Chef Masayuki Hirai, who placed the winning bid, it’s part flavor, and mostly business. The grapes have been specially bred to be sweeter and have lower acidity than average reds. They’re about 18 percent sugar and can grow as large as golf balls.

Japan has a taste for expensive fruit, and the rare bunch will be sold as dessert in some of Japan’s most upscale fine-dining establishments. Chef Masayuki says his bosses at the Hotel Nikko Kanazawa put him under strict orders to get to the ruby romans first. They wanted to capitalize on the opening of a new bullet train line that would bring hungry (and well-to-do) tourists to the area. “With the opening of the Hokuriku shinkansen (bullet train) line, I was told to win the bidding at any cost.” He said.

Other outrageously expensive fruits sold at auction include a melon that sold for $6,200 and a watermelon that went for $4,000. If you’re a fan of sushi, maybe the $37,500 bluefin tuna is more up your alley.

“Japanese often give top-notch fruits such as melons as gifts, and virgin batches often sell for extraordinary prices, making national headlines and creating a lucrative market for fruit boutiques to flourish despite Japan’s sluggish economy. Square and even heart-shaped watermelons are all the rage and, while 38,000 per grape is extreme, many Japanese will happily pay through the nose for fruit — even the regular round-shaped variety. Single white peaches the size of a newborn baby’s head can go for more than 2,000 yen while a bunch of Muscat of Alexandria grapes could lighten your wallet to the tune of a cool 7,000 yen.”