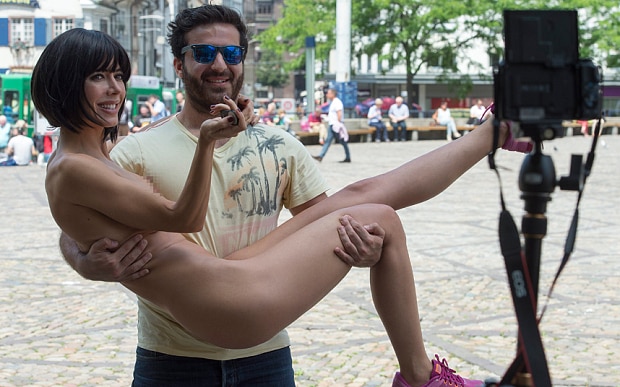 A unique Swiss artist is in hot water after offering naked selfies at the Eiffel Tower. Milo Moiré is known for her body art and naked stunts. Her latest art project had her offering selfies with passerbys and tourists at the famous Paris landmark. Just one important detail: she was completely naked.

The 31-year-old artist was approached by police and told to put on her clothes. Her ‘naked selfie’ art show landed her in a Paris jail for one night.

Public nudity is not taken very lightly in Paris. In fact, it can hold a penalty of a year in jail and a £10,600 fine. Sometimes there are exceptions made for artists and performers. That leaves some to speculate that French police don’t believe Moire to be a serious artist.

Her manager Peter Palm was present at the arrest and said: “She was taken into custody, had her rights read to her, fingerprints taken, photographed and detained in a cell.”

France may of been uptight over her performance, but other countries have been much more lax on her nude performances. In fact, she recently did the same stunt in Switzerland and did not have one problem with law enforcement.

Moire is not stranger to shock. She once did an art installment that involved her crushing paint-filled egg with her genitals onto a canvas.

Anything for the sake of art.

The US arms sale industry is large and successful. More than 30% of exported weapons in the world come from the United States. They supply to no less than 90 nations making it one of the largest suppliers of weapons in the world. The US makes an estimate of almost 200 Billion dollars in annual… END_OF_DOCUMENT_TOKEN_TO_BE_REPLACED

Now that the election results are almost final, we all want to ask what’s going to happen to Donald Trump after leaving the office? All US Presidents inevitably reach the point where they leave the White House.  Besides, the constitution states that all US Presidents are subject to a two-term limit. What do former presidents… END_OF_DOCUMENT_TOKEN_TO_BE_REPLACED

This is the first time in modern history that the US held presidential elections in the middle of a pandemic. In truth, the US elections may have overshadowed COVID-19 and the side effects are limitless. America is facing a tough crisis of discontentment with the current administration. An understandable case but a situation that may… END_OF_DOCUMENT_TOKEN_TO_BE_REPLACED