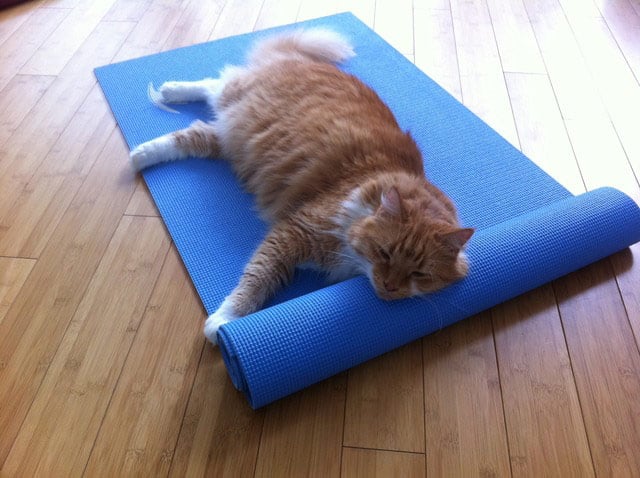 NORTH CAROLINA, United States (SND) — A yoga studio in Asheville, North Carolina wants to keep the ancient art of stretching and meditation from getting too stale, and they’re doing it with cats. The Little Volcano yoga studio will host their first “Yoga with Cats” session July 12th, and all proceeds will go directly to the local Brother Wolf animal shelter.

According to the company, the class combines “felines, adoption, yoga, snuggles and happiness.” The purpose has less to do with exercise, and more with spirituality and “healing”.

“Since we view our style of yoga as a healing process more than a workout,” co-founder Rosie Volcano told Mountain XPress, “we try to incorporate the healing tools that have helped us the most.”

“We don’t know of any history of yoga with animals or cats specifically, but animals have been used in healing since the beginning of time,” She continued. “Have you ever had a dog or a cat or any pet who knows when you’re upset? Or knows when you’re sick and puts its paw right over the spot that hurts?”

Taking the Bulls–t Out of Yoga

I spoke with Rosie this morning. She told me more about their mission to heal the soul with humor and felines.

“We learn how to take the bulls–t out of teaching yoga.” She said. “We are not going to tell you that you should be happy and peaceful and ‘one with the universe’ if your life is in shambles and you’re full of sadness, grief and rage. What we can do is help you process your sh-t so you can turn it into fertilizer and use it to heal your spirit and your body.”

The Little Volcano also incorporates costumes, masks, wigs, and glitter into their classes, which Rosie told me puts people at ease.

“The idea behind it is to make people comfortable.” She said. “Many people are intimidated to walk into a new space, especially one where your bodily skills (or lack thereof) are on display. By adding in an element of play, you take away some of the fear and intimidation of doing yoga.”

“It’s almost as if the sheer ridiculousness of the costumes and masks puts people’s guards down.” I said.

“That’s exactly what we’re going for!”

I turned the conversation to the Yoga with Cats class. I had spent the morning emailing Rosie and reading about her studio, but one question burned in the back of my mind: what the hell is cat yoga?

“Yoga with Cats is our first ever attempt at bringing in the element of Animal Medicine to the studio with the added bonus of supporting the local no-kill shelter Brother Wolf Animal Rescue.” She told me. “This organization is beloved by all of Asheville and is where almost everyone finds their 4-legged friends. We’re working on getting donations for food, drinks and raffle prizes to raise even more money for the animals.”

After briefly explaining the concept of animal medicine (in short: snuggling with animals makes you feel good), she elaborated further.

“The way it works is Brother Wolf will drive over about 15 adoptable cats about an hour before the class. They’ll set up food and littler boxes, let them get comfortable. Then people will arrive and we’ll do a simple 90 minute yoga class where the cats can roam free and cuddle on people’s mats, play with their pants and generally be the cute creatures that they are. After class, we’ll give people an opportunity to get to know the felines a little better, and possibly adopt one! This part of the day will include raffles and drinks, with all the proceeds going to Brother Wolf.”

If the turnout is good, the studio may add Yoga with Cats to their roster of regularly scheduled events.

Believe it or not, this isn’t the only feline-related yoga program out there. The YouTube channel Sho Ko is dedicated to Shorty and Kodi, a couple of kittehs who practice yoga with their owners.

As a few YouTube commenters have pointed out, that’s one remarkably docile cat.

No Charges for Texas Woman Who Killed Pet Cat With Bow