SEATTLE, United States (SND) — When the Girl Scouts of Western Washington received a  $100,000 donation, it seemed too good to be true. Unfortunately, it was. When the Girl Scouts of America publicly reiterated their long-held policy of allowing transgender girls to join their organization, the donor wrote a letter to the Scouts’ Washington chapter. It implored them not to use the gifted money to support transgender girls.

According to the Seattle Metropolitan magazine, the donor’s letter read, in part:

“Please guarantee that our gift will not be used to support transgender girls. If you can’t, please return the money.”

Though the letter made Western Washington council head Megan Ferland “very sad”, she won’t reveal the identity of the donor. Ferland isn’t interested in public shaming. Instead, she decided to return the money.  “Girl Scouts is for every girl,” she said. “And every girl should have the opportunity to be a Girl Scout if she wants to.”

For the Scouts of Western Washington, returning such a sizable donation meant losing a quarter of the council’s annual fundraising goal. That money was going to send five hundred girls to camp. It was a bold, risky, and noble decision—one that ultimately paid off in a way that exceeded everyone’s expectations.

To recover the lost funding, the Western Washington Scouts launched the #ForEVERYGirl campaign on the crowdfunding website Indiegogo, with the stated aim:

“Help us raise back the $100,000 a donor asked us to return because we welcome transgender girls.”

After a mere two days of fundraising, the Scouts have not only recovered the lost money, they’ve doubled it. As of July 1st, 4,798 people have raised $244,785. The initiative has raised enough money to send some one thousand girls to camp, and at this rate it will likely raise enough for another thousand. 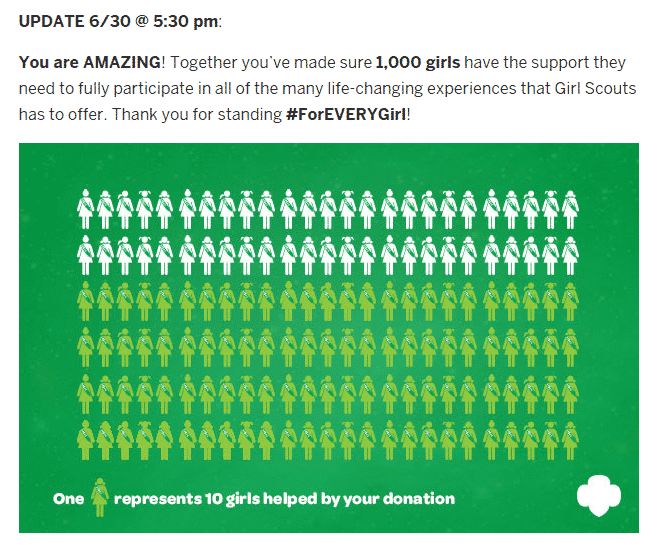 The campaign received quite a bit of attention on social media. The hashtag #ForEVERYGirl buzzed with comments of support and pride in the Scouts decision to return the money.

This Girl Scout campaign is so important. All girls deserve to be a part of a community. #ForEVERYGirl https://t.co/yfVZckxG9q

If you can, consider donating to @GirlScoutsWW in support of their decision to include trans girls. #ForEveryGirl https://t.co/ZworfQxHL9

For many former Girl Scouts, the campaign was a source of pride and nostalgia for the organization that has historically championed equal rights and inclusion.

.@girlscouts already have me weepy with their #foreverygirl campaign. They refused to discriminate even for $100,000. https://t.co/vN2XGYhwgE