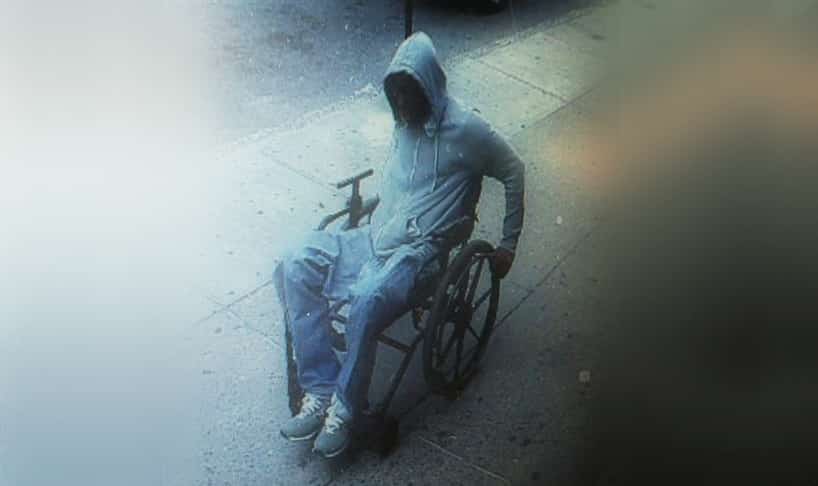 NEW YORK CITY, United States (AP) — Shortly after 2:00pm, a man in a wheelchair rolled himself into the Santander Bank in Queens, NYC. He slipped the teller a threatening note demanding money and claimed he had a gun. The teller gave him over $1,200 in cash. He then calmly rolled himself out of the bank and began heading west on Broadway. The apparently disabled man was able to “outrun” the NYPD. He was able to move so quickly in his wheelchair, he was already long gone by the time the NYPD scrambled helicopters.

Police say the man was wearing a grey hoodie and appears to be around 25-30 years old. He was captured on surveillance video as he rolled past several businesses. He remains at large.

“We are grateful that no customers or any of our colleagues were injured,” a spokesperson for Santander Bank said. “We are not commenting any further at this time due to an ongoing investigation.”

Though a wheelchair-bound man robbing a bank may seem unusual, it is not at all uncommon for people with physical disabilities to commit crimes. In 2005, a paraplegic man stole a woman’s driver’s license and attempted to steal a man’s watch and shoes by flashing a toy gun. The thief’s second intended victim didn’t take him seriously and refused to hand over the items.

In 2009, a paraplegic New Zealand man rolled out of his house with a gun and fired more than a hundred shots at neighboring homes. After wounding a responding police officer, he shouted: “I got heaps of ammo, and I’ve got f–king enough guns to f–king waste you motherf–kers!”

Why do such crimes come as a surprise? Writing for Slate, William Saletan opined that the physically disabled are often viewed and treated differently than the general population. Speaking of Olympic athlete Oscar Pistorius, who was convicted of murdering his girlfriend in 2014, Saletan wrote:

“We expected better of Pistorius because he’s disabled. We confused the goodness of his story with good character. We put him on a pedestal. But equality isn’t about being special. It’s about being ordinary. People with disabilities aren’t above sin or crime. They’re just like the rest of us.”

To sum it up, having a physical disability doesn’t make a person incapable of doing everything the average person can do—including robbing a bank.

Recent trends have reported that K-pop fans in the US are getting mixed in with current issues in politics. K-pop fan communities are using online platforms to rally up and protest against racism in the United States. In support of the #BlackLivesMatter movement, the online K-pop community has come together in protest. Never has it… END_OF_DOCUMENT_TOKEN_TO_BE_REPLACED

Just this week, lawmakers approved a bill establishing the District of Columbia (D.C.) as the 51st state of the United States of America. This is after multiple calls and protests from the citizens to finally consider D.C. as a state.  However, the bill is not out of the woods yet as it faces multiple oppositions… END_OF_DOCUMENT_TOKEN_TO_BE_REPLACED