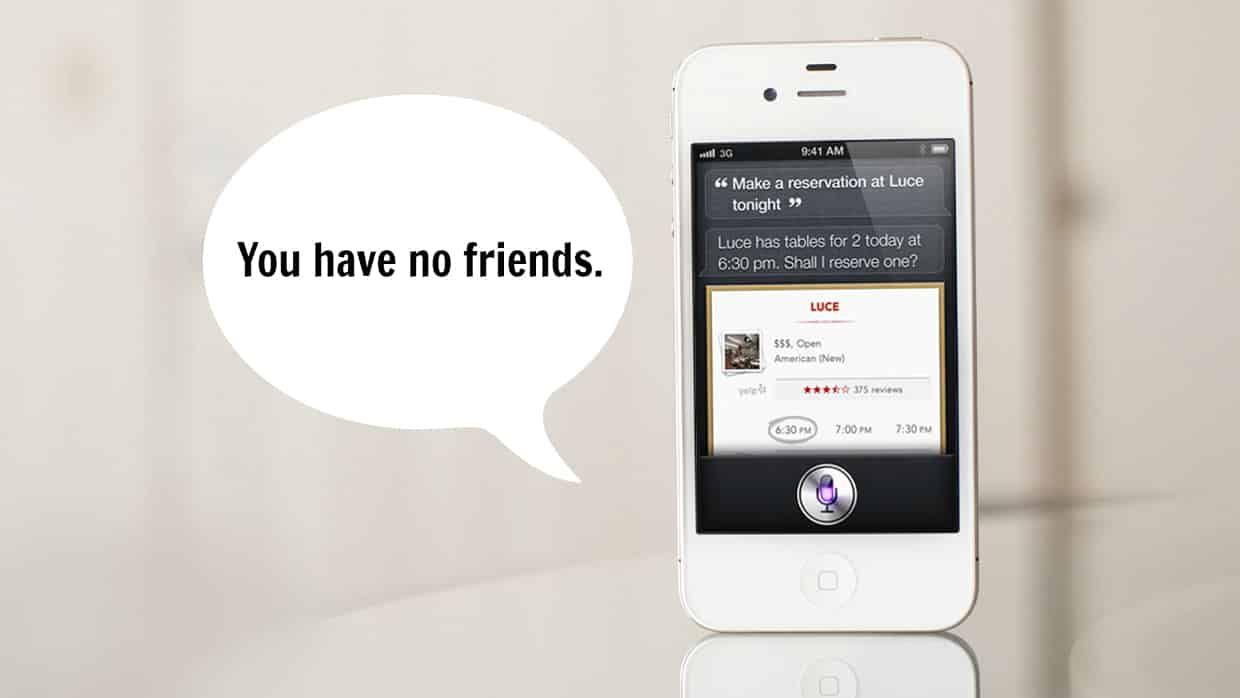 United States (SND) — Apple users are in an uproar this morning after word began spreading of Siri’s hilarious response to the question “What is zero divided by zero?”

Ask Siri what 0 divided by 0 is

iPhone users, go ahead and ask away. For everyone else, spoilers are below this gif that will totally make sense in a moment.

Alright, here’s what she says. Again, this is in response to the question “What is zero divided by zero?”

“Imagine that you have zero cookies and you split them evenly among zero friends. How many cookies does each person get? See? It doesn’t make sense. And Cookie Monster is sad that there are no cookies. And you are sad that you have no friends.”

Harsh! This is a far cry from the Siri who would gently remind you to watch your language if you got too frustrated with her. Across Twitter, the hashtags #Siri and #nofriends are trending as people discover the hilarious response. Clearly, there are a lot of hurt feelings out there.

Just asked Siri what 0 divided by 0 is and she cut me DOWN. (she can see into my soul) WHY DON'T YOU LOVE ME, SIRI??? #siri #nofriends

This is hardly the first time Siri has shown us her sassy side. In fact, a tumblr blog dedicated to the digital assistant has cataloged some of her snarkiest responses. Here are a few highlights.

Some More Amusing Things You Can Say to Siri

In case you’re curious, bored, or both – Siri comes with quite a few Easter eggs. Try telling her one of the following:

Single Text Can Crash Your iPhone

Will Smith disclosed in a podcast interview recently that he would “consider” running for president “at some point.” In an interview released Monday, the 52-year-old rapper told Crooked Media’s “Pod Save America”: “I think for now I’ll let that office get cleaned up a little bit. And then I’ll consider that at some point down… END_OF_DOCUMENT_TOKEN_TO_BE_REPLACED

Vaccination programs are currently on roll-out and countries that vaccinated for COVID-19 are talking. Questions are everywhere, and it is building up people’s anxieties about vaccination. How has the vaccine affected their population? Are the vaccines any good? Should we research more on newer vaccines? Can the vaccines kill the mutated virus? The answers change… END_OF_DOCUMENT_TOKEN_TO_BE_REPLACED

Texas Senator, Ted Cruz, received heavy criticism after taking a vacation to Cancun with his family in the middle of a crisis. The latest power crisis in Texas left hundreds of homes without electricity and water for more than 48 hours in negative degree weather. This has left the lives of many Texas residents in… END_OF_DOCUMENT_TOKEN_TO_BE_REPLACED