OHIO, United States (AP) — Four years after a viral video helped lift Ted Williams out of homelessness, he’s announced plans to run for the presidency. In 2011, Williams was a homeless former voice actor whose life had been torn apart by substance abuse. Trying to get back on his feet, he stood near a busy road, holding a sign that advertised his voice-over skills. 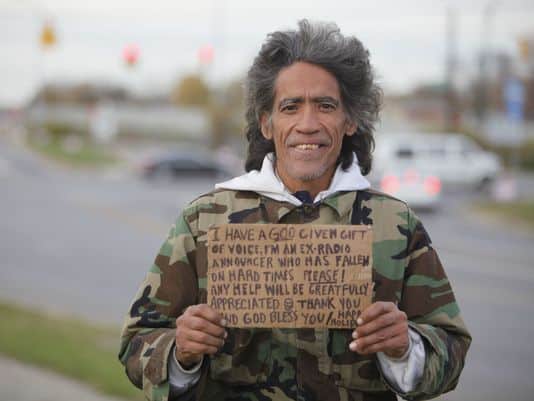 “I have a God given gift of voice, I’m an ex-radio announcer who has fallen on hard times. Please! Any help will be greatfully [sic] appreciated. Thank you and God bless you / happy holidays.”

That’s where he was discovered by Doral Chenoweth, a videographer for the Columbus Dispatch. The video he shot quickly became a web sensation, as commentators dubbed him “the Man with the Golden Voice”.

After the video’s online success, Williams was tracked down by several media outlets, many of whom offered him recording jobs. The media attention proved to be a double-edged sword, however. Despite his desperate situation, Williams had managed to remain sober for a number of years, but the money and pressure led him to start drinking again. But now, after a public battle with alcoholism, Williams is not only sober and working again, he’s ready to run for president.

Williams says he’s recently been touring corporate events as a guest speaker, but notes he has yet to establish a campaign staff. He hasn’t yet indicated how his fundraising efforts will be handled.

As for Williams’ political party, he said he plans to run as an Independent, with a focus on fair housing, veterans’ issues, jobs and improving schools – issues which are no doubt personal to the U.S. Army veteran who endured seventeen years of off-and-on homelessness.