Billionaire, reality TV star, and 2016 Presidential hopeful Donald Trump isn’t shy about expressing his hard line stance on immigration. In a speech announcing his Presidential aspirations, he went as far as calling the majority of Mexican immigrants criminals, and insinuated Mexico was “sending” rapists to the United States.

In the Hispanic and Latino community, reaction to Trump’s remarks has, understandably, been quite negative. Spanish-language television broadcaster Univision pulled out of the Trump-produced Miss USA pageant, calling Trump’s remarks “insulting” and releasing the following statement:

“At Univision, we see first-hand the work ethic, love for family, strong religious values and the important role Mexican immigrants and Mexican-Americans have had and will continue to have in building the future of our country. We will not be airing the Miss USA pageant on July 12 or working on any other projects tied to the Trump Organization.”

In response, Trump banned Univision employees from his properties, including his golf course.  “Of course I’m standing by the statement.” He told Fox News. “I’m going to have to sue Univision now… They have a signed contract […] They’ll have to pay me a lot of money.”

“I love Mexico,” He added. “I love the Mexican people.”

But claiming to love Mexico did little to stop the backlash his comments sparked. In Mexico, that backlash is taking on festive form. Mexican artist Dalton Ramirez designed a Donald Trump pinata, and people are clamoring to bash the billionaire’s face in with a stick (a broom handle or baseball bat works, too). 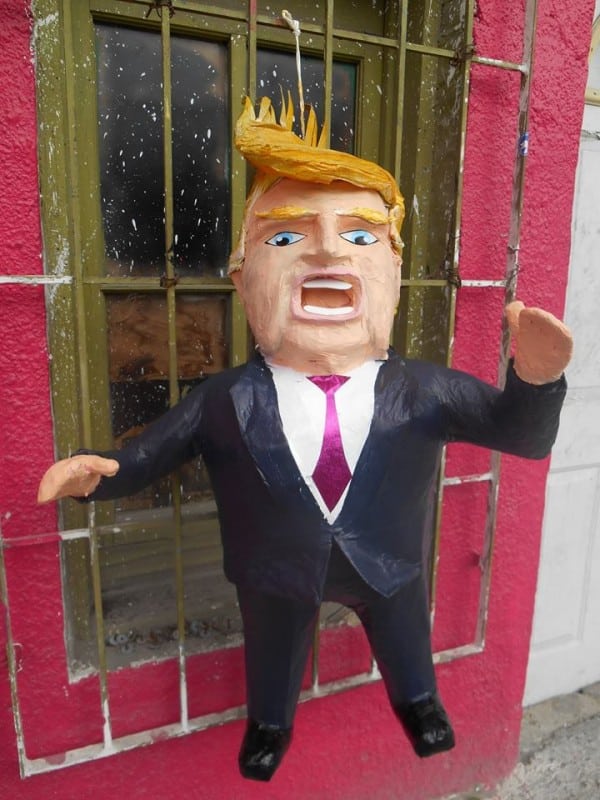 “Normally I don’t care if the pinatas I made will be broken,” Ramirez said, speaking in Spanish.  “But especially this pinata, we could say, is the one that everyone wants to break. When we were making it, we said, ‘Let’s break it, let’s do something to it,’ because we’re angry because of what he said.”

But what would you stuff a Donald Trump piñata with? Let’s ask the piñata himself.

If only, if only.