Was Zayn Malik Around On Filming 1D’s New Fragrance Ad?

One Direction has just come out with an ad for their brand-new fragrance, “Between Us”. According to the official site, the words “invigorating”,”sensuality”, “seductive” ad “outstanding were used together in the same description:

Juicy mandarin and apricot nectar are both energizing and invigorating. The floral heart of the fragrance opens full of solar jasmine flowers and freesia while gardenia petals bring delicate intrigue. Patchouli brings mystery and sensuality while vanilla and golden amber indulge you in a seductive blend of candied sugar, revealing an outstanding fragrance.

while we agree it certainly sounds like a lot to wear in one go, we’re loving the humor in their new TV spot, as if watching Liam awkwardly navigating marble stairs in diver’s flippers wasn’t enough.

Some eagle-eyed fans are saying that Zayn Malik may have still been around during the filming of the ad.

To scope out the clues yourself, check out the “making of” video below:

Did you spot them?

Fans certainly saw what wasn’t there, as they noticed the lack of certain body ink on Harry Styles and Louis Tomlinson.

No dagger no mermaid tattoos! They both got the tattoos around November! Zayn left in March! WTF IS THIS 😭 pic.twitter.com/QuyrBEpTtO 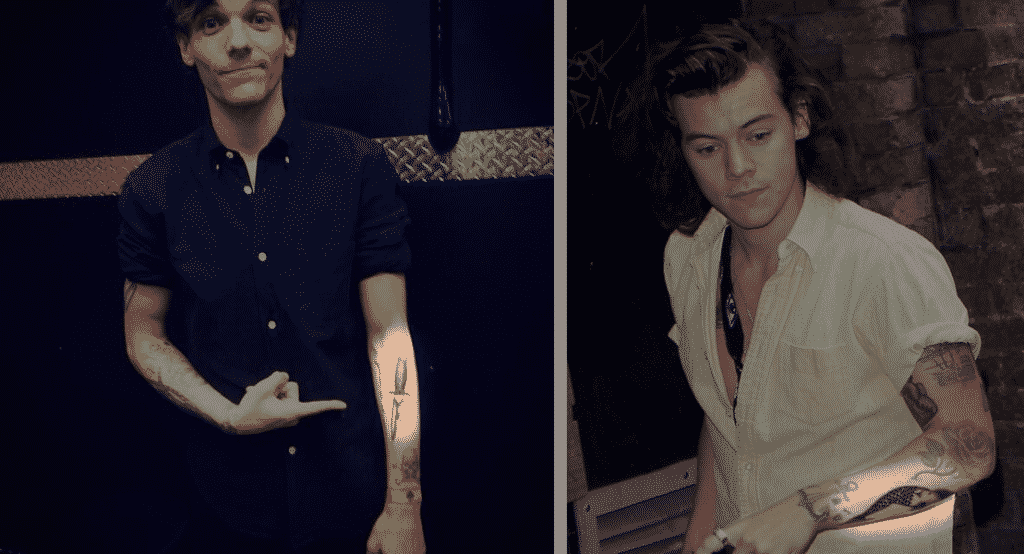 Aren’t you boys missing something? Specifically, a mermaid and a dagger?

In addition to that, filming of the ad started in November last year, with Zayn announcing he’d leave the band March 2015. Hmm. Was Zayn around during the shoot? One fan says yes, he was, and got edited out of the stills to keep things hush hush:

Zayn was at the photoshoot of “Between Us”, but because of his leaving, they edited the videos and pictures! pic.twitter.com/SF1jY69xFB

Was Zayn supposed to pose for the pictures, or was he lingering around backstage? We may never find out.