UNITED NATIONS (AP) — Internet and social media companies should respond to the exploitation of their services by radical Islamist groups, a U.N. panel said on Wednesday. The panel’s report calls on companies like Facebook, Twitter, and Google to do whatever possible to curb the “increasingly horrific propaganda” groups like al-Qaeda and ISIS/ISIL post to their sites.

The Scale of Online Radicalization

“The scale of the digital threat linked to radicalization,” the report stated, “together with the need for concerted action on countering violent extremism, calls for further action”. ‘Radicalization’ is a term used to refer to the recruitment of people, usually young men, into radical or extremist religiopolitical organizations. According to the International Association of Chiefs of Police:

Dr. Robert Thomas, in an article entitled ‘Radicalization and the Use of Social Media‘, said terrorist organizations “know that social media applications appeal to their target demographic and are using social media to recruit and radicalize young people.”

“Social media applications are not a fad,” he added, “and government leaders need to seek to understand the benefits and consequences of [each] application.”

But even in the aftermath of incidents like the 2009 Fort Hood shooting, the 2013 Boston bombing, the 2015 Charlie Hebdo massacre, the attempted attack in Garland, Texas that same year, and most recently — an attack on a French factory that left one man decapitated and several others injured, the role online radicalization plays in terrorism is still somewhat murky.

“Nobody watches YouTube or reads [al-Qaeda funded magazine] Inspire and becomes a terrorist.” says John Horgan, director of the International Center for the Study of Terrorism at Pennsylvania State University. “YouTube videos and reading Al Qaeda magazines tends to be far more relevant for sustaining commitment than inspiring it.”

Horgan says there are “social, political and religious reasons people give for becoming involved”, but adds the bigger reasons may be “personal fantasy, seeking adventure, camaraderie, purpose, identity. These lures can be very powerful, especially when you don’t necessarily have a lot else going on in your life, but terrorists rarely talk about them.”

Jamie Bartlett, head of the Violence and Extremism Program at the left-leaning think tank Demos, opined:

“I have found that many young home-grown al-Qaeda terrorists are not attracted by religion or ideology alone – often their knowledge of Islamist theology is wafer-thin and superficial – but also the glamour and excitement that al-Qaeda type groups purports to offer,”

When it comes to broad appeal, al-Qaeda’s propagandists dropped the ball. Their ‘moral authority’ approach did attract a number of Western converts, but it largely failed to appeal to those base desires Horgan and Bartlett speak of. The Islamic State, however, has sunk a considerable amount of funding into producing high-quality propaganda films that depict life with the group as exciting, adventurous, and rewarding.

The U.N. panel stated ISIS “can claim to have achieved what al-Qaeda never did: the building of a territorial entity through terrorist violence.”

In a piece for the Washington Post, Professor Daniel Byman warned against acting hastily in removing online posts by terrorists and their affiliated organizations. The central question at play: do the costs of potential radicalization outweigh the benefits of counterintelligence? “In some cases, banning particular sites or individuals may make sense if the risk of recruitment and radicalization is high.” He wrote. “But those risks have to be weighed against the intelligence value of having groups such as the Islamic State active on social media.”

“Social media is a counterintelligence nightmare for Islamic State militants. Although tweets and Facebook postings inspired them to fight and helped them get to Syria and Iraq, these technologies are easily monitored […] The same bragging the group did in Syria to inspire others can be turned against it: Intelligence services can determine the identities of supporters and potential recruits, flagging individuals not previously on the government’s radar.”

The U.N. report focused on global Islamic terrorism, but domestic terrorists come in all shapes and sizes, and the internet may also play a role in their radicalization. Earlier this month, twenty-one year old Dylann Roof killed nine people in a South Carolina church after embracing racist ideologies he discovered online.

Mike German, a fellow at New York University’s Brennan Center for Justice, told Democracy Now’s Nermeen Shaikh why he believed the South Carolina shooting was an act of far-right terrorism:

“Imagine the different reaction that would have occurred if Dylann Roof was wearing an ISIS flag on his jacket rather than a Rhodesia flag. And for somebody like me who knows a lot about the white supremacist movement and having been undercover in it, seeing those symbols, seeing the target—you know, the Emanuel AME Church, like many AME churches, isn’t just the spiritual center of the black community, it’s the political center, it’s the social center, so the fact that it’s targeted fits the FBI definition, which is an act of violence intended to intimidate or coerce a civilian population. And the political purpose is obvious. One of the victims, who was specifically picked out, was a state legislator.” 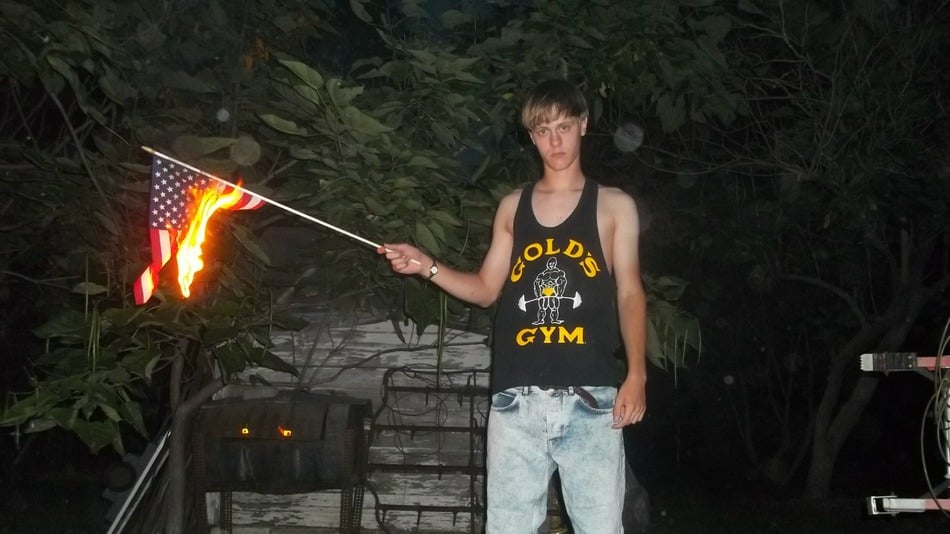