No Charges for Texas Woman Who Killed Pet Cat With...

BRENHAM, United States (CNN) — The Brenham, Texas woman who shot a domestic cat through the head with an arrow, and subsequently posted about it on Facebook, will not be charged with any crime, CNN reports. On Wednesday, a grand jury decided not to indict Dr. Kristen Lindsey. They cited insufficient evidence to implicate Lindsey in the killing, despite widespread circulation of her own admission online. “Without more information,” the District Attorney said, “the State lacks proof that this incident even occurred in the state of Texas.”

Lindsey, a former veterinarian at the Washington Animal Clinic in Brenham, ignited a social media firestorm when she posted an image of herself holding a slain feline to Facebook. In the picture, Lindsey proudly displays the dead or dying animal, calling it her “first bow kill”. The full caption reads:

“My first bow kill [cat emoticon] lol. The only good feral tomcat is one with an arrow through it’s head! Vet of the year award…gladly accepted [laughing emoticon]”. 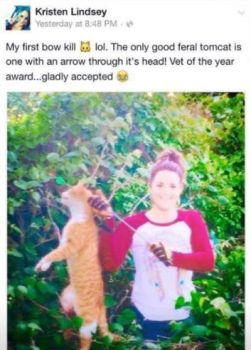 As the image spread, reaction online was extremely negative, especially when the slain animal was identified as “Tiger”, a pet cat which belonged to Lindsey’s neighbors. “You had no right killing someone else’s beloved pet.” Said one commenter. “You didn’t even have a right to kill a feral animal that way. Feral cats perform an important function.”

On Lindsey’s blog, where she lists “killing things or trying to kill things (animals […] etc)” as one of her interests, a woman who says she’s familiar with archery chimed in regarding how Tiger was likely killed. 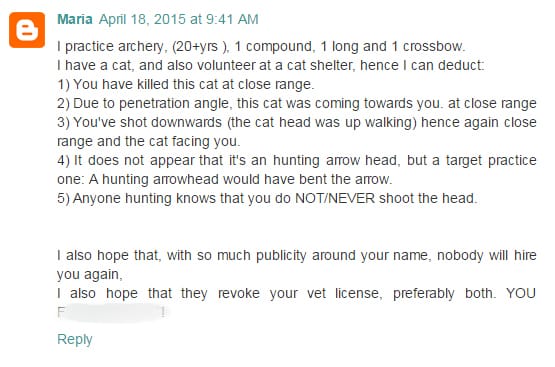 After Lindsey and her parent’s personal contact information was posted online, the family reportedly received death threats. “I’m just ignoring all the death threats.” Lindsey said. “Insulting me doesn’t make you any better.”

The hashtags #JusticeForTiger, #IAmTiger and#kristenlindsey, along with a Facebook group called Justice for Cat Murdered By Kristen Lindsey, sprang up soon after her original post went viral. Many called for Lindsey to lose her job and veterinary license.

On Facebook, Kristen Lindsey claimed she was ‘too awesome’ to be fired.

“We are absolutely appalled, shocked, upset, and disgusted by the conduct.” A spokesperson for the Washington Animal Clinic told the press. “We have parted ways with Ms. Lindsey. We do not allow such conduct and we condemn it in the strongest possible manner. Please know that when informed of this we responded swiftly and appropriately and please do not impute this awful conduct to the Washington Animal Clinic or any of its personnel.”

Tashara Parker, reporter for KAGS News in Bryan, Texas, tweeted a photo of protesters outside of the courthouse where Lindsey’s alleged crime was dismissed. 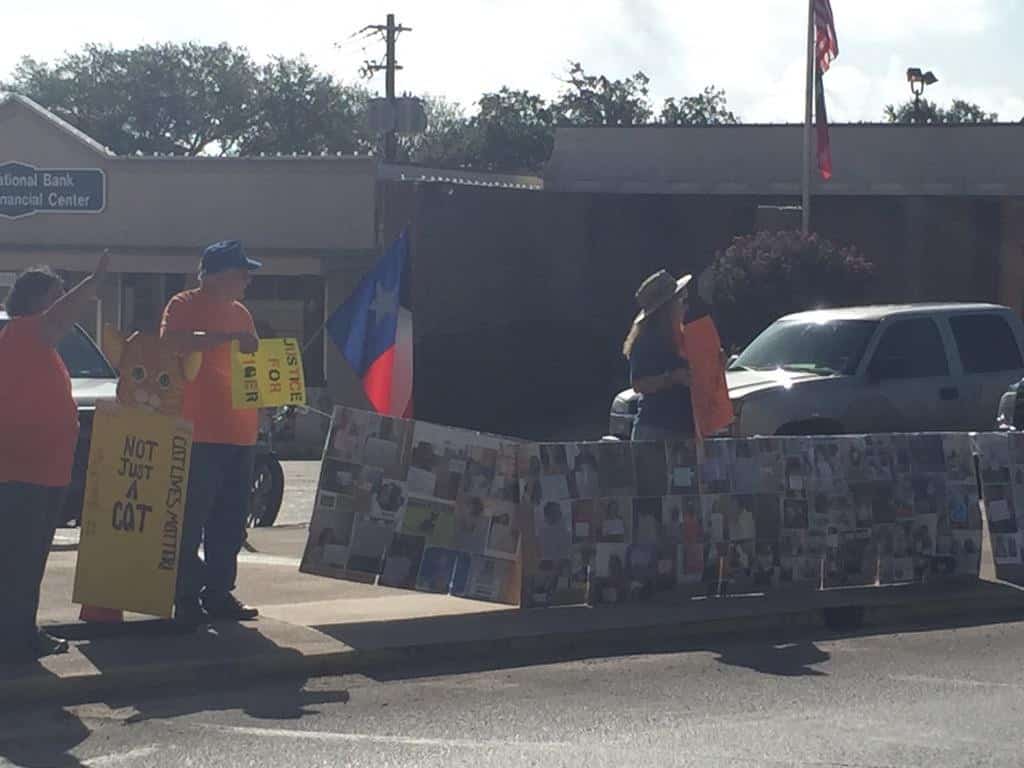 A number of social media users have been sharing contact information for local and federal veterinary officials, encouraging people to express their desire for Lindsey’s license to be revoked.

In addition, a Change.org petition with over 25,000 signers is asking the Texas State Board of Veterinary Medical Examiners to revoke Dr. Lindsey’s veterinary license. Part of the petition’s statement reads:

“Please do the right thing, and permanently revoke her license due to lack of ethics and violating the trust of her profession. She’s not fit to serve as a vet.”

Ricky Gervais Goes On Twitter Rant, Speaks Out Against Animal Cruelty
Dead Bobcat Hung From Goalpost At Tullahoma High School
Writer and journalist living in the Houston, Texas area. Follow me for breaking news, editorials, pictures of cats doing human activities, and other such content from around the web.