“You’re In My House”: Obama Shuts Down Heckler During LGBT...

POTUS Barack Obama is usually a patient guy. He’s been dubbed “No-Drama Obama” by the press, and he’s given to addressing heckler’s concerns in his speeches. However, it seems one heckler in his most recent speech was one too many.

During his speech on immigration at a White House event celebrating L.G.B.T. Pride Month, a heckler interrupted his speech, calling out from the back of the room, “President Obama, release all L.G.B.T.Q. immigrants from detention and stop all deportations!”

Obama had to stop the heckler, saying “Listen; you’re in my house.” This was greeted with cheers from the audience, and Obama continued “It’s not respectful when you get invited to somebody’s…” It seems he was interrupted further, and that’s when he lost it.

“You’re not going to get a good response from me like this… Shame on you; you shouldn’t be doing this.” In the midst o the press cheering Obama’s name, he asked security to escort the heckler out. He later on commented that if a guest was invited to a person’s house, “eating the hors d’oeuvres and drinking the booze,” it’s common courtesy that they listen respectfully. 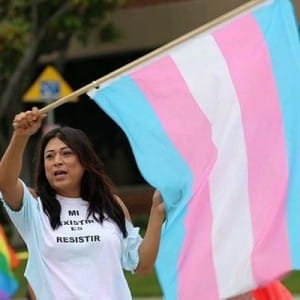 The heckler was later on identified as Jennicet Gutiérrez, a 29-year-old latina transwoman and undocumented immigrant, founder of FAMILIA TQLM and affiliate member of Not1MoreDeportation, an organization that opposes Obama’s deportation policies.

Gutierrez says the outburst was unplanned when she attended the speech with a spare ticket provided to her by a friend. “[Obama] came out, started speaking and started to get into his speech on how wonderful everything is,” Gutiérrez shares on a phone interview with The Advocate. “And I couldn’t help but think about the conditions that my LGBTQ Latino/Latina, especially trans women of color, are facing in detention. So, to me, that was the moment I had to speak up. I had to raise awareness to the President and to everyone else watching that I’m not just going to celebrate, when my trans sisters are facing a lot of violence in the detention centers. [Trans women are facing] sexual and physical abuse, and I just had to send a message.”