Meet the Guy Who Wowed the Internet with His Cover...

by Timothy Bertrand 7 years ago8 months ago

MADRID, Spain (SND) – Two days ago, composer and guitar teacher Miguel Rivera uploaded his solo acoustic performance of Michael Jackson’s ‘Beat It’ to YouTube. It quickly went viral after being posted to reddit’s /r/videos. Since we initially reported on the story, Rivera’s music video has garnered an additional 510,000 views.

The video, in which Rivera plays all of the song’s instrument arrangements on one acoustic guitar, is getting serious attention from music websites like Guitar World.

I spoke with Miguel over Facebook this morning, and he seems pleased as punch that the video is gaining popularity.

“Well, why don’t we start with the basics? Can you give me a little background info about yourself? […] You mentioned you live in Spain, where in Spain?” 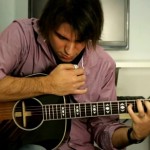 “Yes, I’m from Zaragoza, a city in the north of Spain. I was in a band, ‘YOD’, for 10 years, my brother was the singer. We both composed the songs. We released an album in Spain in 2005 [in the] ‘Pop/Rock’ style. No success, very little hype. In 2005, I abandoned the band and [decided to] stay in Madrid with my girlfriend, that today is my wife. I started to give guitar classes. In three months, I had 20 or more students, so I continued with that.”

He told me he started to learn guitar at age fourteen, practicing ‘Greensleeves’ for hours on end. I asked if he knew he wanted to do something musical with his life.

“Yes, at 16 I wanted to be a rock star. (Laughs) You know, like Slash. Then I realized it was difficult, and maybe I could be a guitar teacher if I would keep studying music. So I continued [to] study in Madrid and then on my own — classical music, orchestration, composing is the best thing for me, but I’ve enjoyed very much making the ‘Beat It’ arrangement.”

‘I Wanted the Best Audio and Video Quality Possible’

“The Beat It cover is certainly exploding with popularity right now. A lot of people simply can’t comprehend so many parts to the song being represented at once, on one guitar.”

“This is something that comes from orchestration, I think — to be conscious of the different melodic lines. And with certain types of techniques, I knew that it was possible, at least I had to try (Laughs). It was a very motivating thought.”

I then asked him if the audio in the video was recorded live or in a studio. “The audio was recorded at home and then I had to play over the song to shoot the video.” He replied. “To play on the music pre-recorded is, I think, more difficult than to play it live. You have to adjust your tempo perfectly, but this way you have a very good sound and a very good image.”

“I know that is something that some people can use to criticize the video or my guitar playing,” he adds. “But they only have to go to a one of my concerts if they want to see it live. I wanted the best audio and video quality as possible with our little resources.”

‘Pay Attention to the Technique’

“Have any of your students seen the video?”

“All of them. (Laughs) They are fliping out, like me, about the repercution [sic] of the video. They are important for me and they help me. We have a real good relationship. One of them had the idea to put it on reddit.”

I asked if he had any advice for aspiring guitarists. He emphasized the need to master the basics first.

“Yes. Pay attention to the technique; how to take the pick, position of hands, that kind of thing. It’s important to have a good technique in order to not construct walls that can be bad for the learning. When you master the basic technique, you can think of making different things and look for your own way to do things.”

I asked him if he plans to revisit the music industry after the success of the ‘Beat It’ cover. “I’m open to suggestions” He said, laughing. “I would like people to watch ‘Oneiric Tales’ too, it’s an original song with an exotic sound.”

He said he’d like to compose more original songs and upload another cover, but he isn’t sure which one to do yet.