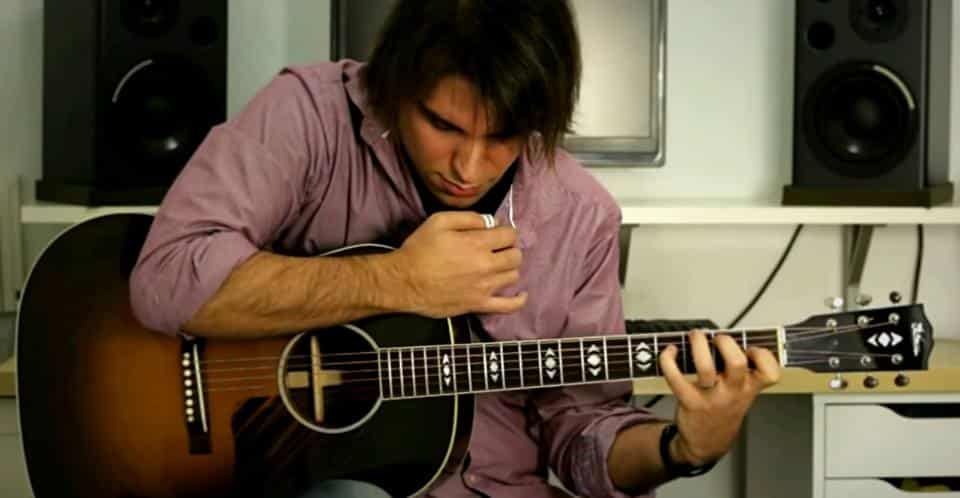 Update: Check out our exclusive interview with Miguel.

Musically speaking, some are more gifted than others. Then you have those rare freaks of nature that can play every part of a multi-instrument song, including the vocal and backup vocal melodies, on one acoustic guitar.

That’s the kind of freak Miguel Rivera is, as demonstrated by this video that hit the web yesterday.

With near perfect rhythm and precision, he hammers out the song’s percussion line with string slaps and well-timed beats on the guitar’s body, yet he never misses a note of the song’s complex rhythm and vocal sections. Using a technique which produces harmonics – those faint, ringing notes that comprise the backup “vocal” in Rivera’s cover, he’s able to carry the entire song with just one guitar.

The video was uploaded to reddit’s /r/videos yesterday evening, and has been steadily gaining traction across the rest of social media. “Holy harmonics, thanks for the eargasm.” Said one reddit user.

As of this morning, the video has just over 40,000 views on YouTube, but it’s rising fast.

On YouTube, Rivera explained why he decided to perform the cover.

“I decided to star working on this arrangement because it was a great challenge. When you listen to the chorus of the original song, you can hear the main riff (recorded by Steve Lukather) sounding together with the Michael’s vocal melody and, of course, drums, bass and other instruments. My objective was to play all together: the main riff, the vocal melody and the percussion part. I had to find the proper tuning and make good use of the harmonics but in the end I got it. The tapping part is to remark on the great solo that Eddie Van Halen recorded for this song.”

‘Beat It’ was the third single from Michael Jackson’s megahit ‘Thriller’. The lyrics, penned by Jackson, are about defeat and courage. In his book, Dancing the Dream, Jackson explains his songwriting process.

“People ask me how I make music. I tell them I just step into it. It’s like stepping into a river and joining the flow. Every moment in the river has its song. So I stay in the moment and listen.

What I hear is never the same. A walk through the woods brings a light, crackling song: Leaves rustle in the wind, birds chatter and squirrels scold, twigs crunch underfoot and the beat of my heart holds it all together. When you join the flow, the music is inside and outside, and both are the same. As long as I can listen to the moment, I’ll always have music.”

This 11-Year-Old Is Better At Guitar Than You [Video]