Apparently between these two cats, one of them knows who’s boss around these parts.

Comedian Youtuber Tom Mabe, who gave us viral prank videos such as the Extreme Puppy Makeover and the Homeless Dog Rescue with Prank It FWD, brings us another vid where this time, it’s Mother Nature who seems to be pulling his leg. 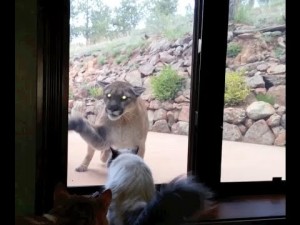 The video opens for us to witness a mountain lion trying to claw its way into their home in Louisville, Kentucky, through a glass panel. We see it snarling and perhaps trying to intimidate Mabe’s Himalayan cat — who simply does what cats do best and stare at its larger, wilder mountain cousin in abject fearless curiosity.

Mabe comments on and chuckles at the felines’ antics as he records them. We hear his wife asking: “where are the kids?”

Soon, the mountain lion bores of the glass door and leaves. Their warier orange tabby creeps in beside the Himalayan and gingerly peers out as the large feline stalk away.

Seeing wildlife explore human’s backyards is part and parcel of living in a home close to forests and mountainsides. From fox kits discovering a trampoline to a possum hiding in a woman’s closet, these encounters can be pretty cute or funny. Be mindful, though, that no matter how cute that possum, fox, coyote, or bear might be, they’re still wild animals.

Why do they wander into human territory, anyway? Experts say that that it’s not so much that they’ve wandered into ours as it is we’ve taken over theirs. True enough, too: the roads built around their territory may end up confusing them and fencing them in, or they may even risk becoming roadkill just to get to the other side, searching for food, water, space, or potential new mates. the residential areas developed into mountainsides do the same thing to their prowling grounds, and being curious creatures, they explore these unfamiliar territories, searching for potential food or shelter.

Protecting your kids from potentail danger is wise, though using the situation to educate them is even wiser. Here are 6 steps you can use to help kids better understand and help wild life in their backyard.