Governor Nikki Haley expressed that many South Carolinans revere the confederate flag not as a racist symbol, but as a way “to honor their ancestors.” With that said, she continued, “That flag, while an integral part of our past, does not represent the future of our great state.”

In the light of the tragic and racially-charged shootings in Charleston, Governor Nikki Haley called on South Carolina to finally remove the Confederate battle flag from its place in front of the State House. 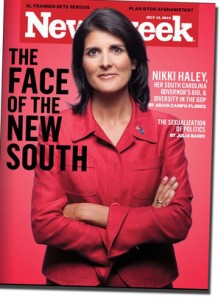 She argues that with though many citizens of their home state honor the flag for its history, the recent shootings have turned it into “deeply offensive symbol of a brutally offensive past.”

“The events of this week call upon us to look at this in a different way,” she says. “Today we are here in a moment of unity in our state, without ill will, to say it’s time to move the flag from the capitol grounds.”

The announcement and stance shed new light on the governor. Serving her second term in office, she had expressed little interest in the divisive issue of the flag in the over five years of her gubernatorial career. Nonetheless, this turnabout was greeted with approval and cheering from many supporter of the move, as well as US senators Lindsey Graham and Tim Scott.

Seemingly taking a cue from the historic announcement, Walmart also announced that the company would cease selling confederate flags and any sort of merchandise sporting it. Items ranging from pocket knives, blankets, t-shirts, and even shower curtains carrying the confederate flag will be removed from their inventory. The arrest of Dylan Roof, the 21-year-old extremist who shot and killed 9 African-American people at a worship service in the Emmanuel A. M. E. Church , brought to light chilling photos of him posing grim-faced with a .45 caliber handgun and a confederate flag.

The White House released an announcement that President Barack Obama will travel to South Carolina to give a eulogy for Rev. Clementa C. Pinckney, the slain pastor of the church.

Charleston Police Chief: “We Are Not Leaving Any Stone Unturned.”