When the Taylor Swift brand was launched on the world in 2006, few predicted the humble pop-country singer would become the music industry powerhouse she is today. Late yesterday evening, she demonstrated just how influential she really is, when Apple executive Eddy Cue took to Twitter to announce the company will pay artists who appear on their upcoming music streaming platform. This comes after Swift threatened to boycott the service unless artists were paid fairly.

Apple will always make sure that artist are paid #iTunes #AppleMusic

Cue went on to assure the public that the artists will be paid “even during the customer’s free trial period” the company is offering new users.

#AppleMusic will pay artist for streaming, even during customer’s free trial period

We hear you @taylorswift13 and indie artists. Love, Apple

The music industry has been struggling to adapt to the digital age, where music can be shared royalty-free across the internet and companies like Spotify offer consumers an alternative to purchasing albums or downloading MP3s.

Some artists have better adapted to the change than others. Metallica’s Lars Ulrich famously turned himself into an internet pariah when he led the charge against Napster and other file sharing services at the turn of the century. His anti-sharing stance was even parodied on South Park, where he was portrayed weeping over the fact that he could no longer afford “a gold-plated shark tank bar” for his backyard. 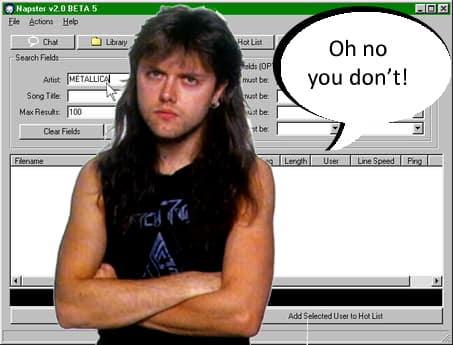 But aren’t Lars and Taylor on the same side here? Kind of. Ulrich’s advocacy came at a time when file-sharing was in its infancy, and the industry at large had no idea how to deal with the file-sharing movement – so they fought it, hard.

Swift’s boycott, however, comes after the industry’s rebirth – an exciting time when new services and technologies are rolled out every year, all attempting to nab the ever elusive music fan. People have more sympathy for artists now, especially the struggling independent musicians who finally have a presence on mainstream music platforms. It’s now up to big-name artists like Swift to make sure this reinvented industry treats artists fairly.

As evidenced by the comments on Twitter, most music fans were proud of her advocacy.

Found a photo of @taylorswift13 on her way out from talking to @cue about #AppleMusic royalties. pic.twitter.com/vFMcyQXtxb

@taylorswift13 SO proud of you. You are literally a game changing human being!

Apple Music is set to launch June 30th, 2015. It is intended to rival Spotify as a cross-platform, music streaming service.

Every Day Is Earth Day At Apple