Thousands upon thousand of brightly-colored red crabs washed ashore on Orange County, California, turning the tawny beaches into a prickly red carpet of shells and struggling shellfish. Residents were amazed to see the creatures amass on their beaches in a span of three days, and some had to carve a path out of them with paddles and shovels due to their immense numbers.

A number of residents took immediate action. Families and individuals carefully combed the red piles for moving crabs and picked them out to later release them back into the sea at a safe depth. 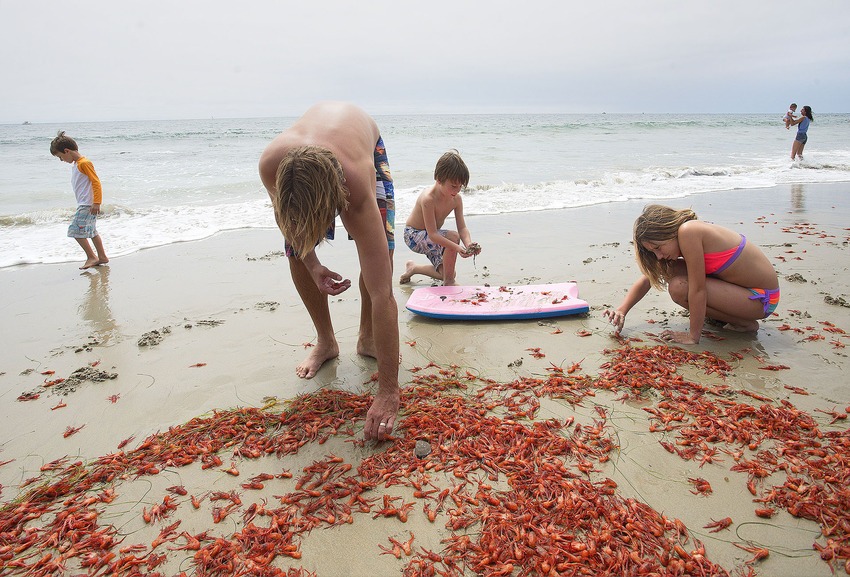 These crabs, also known as tuna crabs or pelagic red crabs, normally occupy Mexico’s Baja Peninsula. “We don’t normally see these animals because they live at the bottom of the continental shelf.” Mike Schott, marine biologist, explains.  He observes that it’s likely that the unexplainable spike in warm waters spanning the Pacific Ocean,  up to the Gulf of Alaska, and into the Bering Sea is what drew these tiny crabs out.

Other scientists note that the last time this happened was in 1997, right before a massive El Nino. The El Nino brought with it immense storms at sea and mudslides in California, making the arrival of these crustaceans possibly  a red warning from the sea itself.

He also observed that an unusually large school of yellowfin tuna followed the path of these crabs. He explains that these crabs serve as a food source for tuna, and as large predators go, they will follow their food sources. the fish weren’t the only ones savvy to the crabs’ tastiness: a number of seagulls also helped themselves to the easy pickings ashore. In fact, they had eaten so much crab, a number of them became too obese to fly.

Are these crabs edible for humans, though? Unfortunately, experts warn residents that although the idea may sound tempting, it’s not wise to scoop up these crabs and make a meal out of them, as they may contain toxins from the water.