Getting lost can be pretty frustrating. Once Chinese cab driver can tell you from experience. Recently, the taxi driver got lost driving around the campus of Sichuan Vocational College in China. He must have been pretty fed up with being lost, so he decided to take matters into his own hands. Students recorded the footage of the taxi cab bumping down three flights of stairs 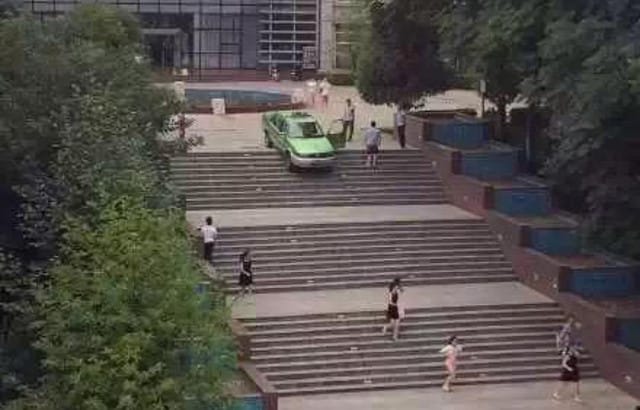 The now viral video shows students pleading with the driver to stop the taxi, but he doesn’t listen. He continues to go down the stairs and then speeds off, despite a dragging bumper and several dents. We wonder if the auto shop bill will be less than the tow truck driver he should of called instead…

The taxi even lost its license plate on the crazy ride, but the driver refused to go back and fetch it. Nothing like leaving a little evidence behind. Luckily, no one was injured in this crazy act. Kind of makes you want to call Uber next time, huh?

You might also enjoy:
Tired Llamas In Taxis Cause Controversy

Uber Is Mocked In ‘Funny Or Die’ Video, Laughable But Awkwardly True [Watch]